Why do Sikhs carry swords with them?

A kirpan is a symbolic short sword carried by an enlightened Sikh and is among Sikhism’s five kakar or articles of faith. The kirpan symbolizes the Sikh warrior’s concept of defending the weak against dictatorship, injustice, and religious persecution. In the past, the kirpan would have been a war weapon. The word kirpan is made up of two words that mean mercy (kirpa) and honor (pan) (aan). The kirpan is not considered a weapon by Sikhs. As a result, given the derogatory link between a dagger and violence, the translation into ‘dagger’ is improper. However, no English phrase adequately expresses the kirpan’s full cultural significance. 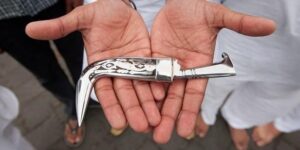 The kirpan’s importance extends to a mental fight with ego, and it serves as a reminder to be wary of the emergence of anger, attachment, greed, lust, and arrogance. Before any is ingested, a kirpan is touched to Prashad and langar to purify and symbolically transfer the strength of steel to devotees.

This custom continues to this day. Parshaad is distributed in the Gurdwara today after the Hukamnama (daily order) is read from Sri Guru Granth Sahib Ji. Parshad is offered to five Sikhs who have legally sworn allegiance to the Guru before it is delivered to the greater Sangat (congregation) (i.e. five Amritdhari Singhs or Singhnian). This tradition demonstrates the Sikhs’ authority and reverence for the Guru Khalsa Panth (represented by five Amritdhari Sikhs), as well as the Guru Khalsa Panth’s continued viability and survival.

The tradition of parshad is considerably different from the institution of langar, even though both are historically founded. Parshaad is somewhat exclusive to Sikhs because its acceptance implies an oath to follow the Guru’s Hukam (command), whereas langar has no such ramifications by definition – langar is for any. Although some people have started to touch the kirpan to a dish of langar, this is a recent occurrence that does not correspond to the parshad custom. 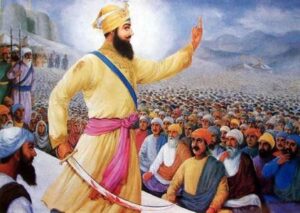 Sri Guru Gobind Singh Ji founded the Khalsa Panth after realizing that nonviolence could not function with barbaric monsters that spoke only war.

Guru Gobind Singh asked the assembled people for a human head on the morning of April 13, 1699. People were hesitant to approach. On the third call, a Sangat member stepped forward and offered his head. Guru Sahib led him into a room and emerged alone, holding a blood-soaked kirpan. Guru Sahib then requested four more of these heads in the same manner.

The panj pyare, or five beloveds, were the five brave men who came up. Guru Sahib gave them the surname Singh and taught them that caste and creed were irrelevant to them.  He awarded five kakars on the panj pyare:  Kesh (unshorn hair),  Kanga  (wooden comb), Kada (metal bracelet), Kachera  (cotton shorts), Kirpan (weapon). All kakaars have their deep meaning and sanctity, but we should focus on the kirpan’s holiness here.

Guru Sahib wished for the Khalsa to be courageous and bold. The Khalsa must be prepared for any attack at all times and consider it his responsibility to protect the honor and dignity of the weak, impoverished, and defenseless. He should never avoid getting involved in something that he believes is unjust. He should not think twice about laying down his life for the greater good. The kirpan can be used for self-defense or to protect oppressed people. However, the kirpan should only be used as a last resort if all other options have failed. 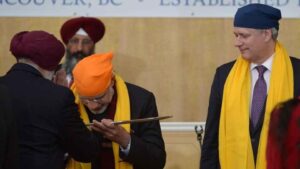 Kirpans range in size from 3 feet blade size, as used by Sikhs at religious festivals, weddings, and parades, to just a few inches in length, as used by Western followers. They can be donned on top of or below clothing. The blade is usually made of mild steel or iron, and the handle is usually made out of metal with leather or wood around it. The Kirpan is typically sheathed, except for instances when it is released from its casing, such as the sanctification of the ceremonial sweet pudding served at religious events.

The legislation recognizes that religious freedom is largely a question of personal conscience, but it also includes the “right to display one’s religion, alone and in secret, or in community with others, in public and among those with whom one shares faith.” Indeed, “practice and observance” are two of the many modes in which one’s religion or belief might present itself. The Kirpan, on the other hand, has had some difficulties on the western front.

The wearing of a kirpan by Sikhs is included in the Sikh religion’s profession and is not illegal, according to Article 25 of the Indian Constitution. Passengers on flights having a point of origin and destination both within India, on an Indian registered aircraft, are entitled to carry a ‘Kirpan’ in person, according to Indian legislation. The overall length of the ‘Kirpan’ must not surpass 9 inches, along with the length of the blade, which must not surpass 6 inches, and the length of the handles, which must not exceed 3 inches. Carrying of ‘Kirpan’ is prohibited in the cabins of an intercontinental flight and must be carried solely by the passenger in his check-in luggage.

The Sikh religion regards the Kirpan in a fundamentally different light than other religions, which often regard the sword as a sign of strength and dominance. The sword can both generate and inspire arrogance. Ignorance is always the result of arrogance. Kirpan continuously reminds Sikhs of the Almighty’s strength. As a result, Kirpan should encourage humility. In the same way that arrogance and ignorance enjoy one other’s company, humility and wisdom do as well.

In today’s world, we must use our power as a Kirpan rather than a sword. Unlike Guru Gobind Singh, who used the Kirpan to free oppressed people, colonists used the sword to subjugate other people and nations. What we must realize is that Guru Gobind Singh raised Kirpan not only to defend Guru Nanak’s ideas but also to give those teachings great relevance.