Who Are The Sikhs? What Is Sikhism | What is the history of Sikhs?

Sikhism is a monotheistic faith that promotes equality and devotion to others. It is the world’s fifth most dominant religion. Sikh (pronounced “sickh”) is a word that signifies “disciple” or “learner.” Guru Nanak developed Sikhism in the Punjab region of India over 500 years ago. Sikhs believe in a single God who shelters and leads them. They believe that everyone is equal in the eyes of God. Sikhs believe that what you do matters and that you should live a good life.

Sikhs adhere to three essential principles: praying in God’s name, earning a living via honest means, and sharing the results of one’s labour with others. Sikhism rejects caste and class systems in favour of human service. 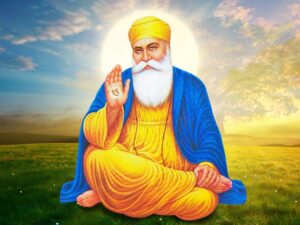 Turbans are worn to respect God and to hide our long hair. Sikhs wear their hair, beards, and moustaches uncut. The humanitarian concepts of freedom, equality, and fairness are taught in the Sikh faith, and they are the same ideas upon which this great democracy is built. The universality of the Sikh way of life appeals to people of all religions and cultures, inspiring us to see past our differences and work together for world peace and harmony.

The Khalsa, or ‘Community of the Pure,’ is the name given to the Sikh community of men and women. The Five Ks must be followed to become a Sikh and join the Khalsa

Sikhs regard the Kesh, also known as Kesa, or uncut, long hair, as an essential element of the human body.

The Kanga is a wooden comb that is one of Sikhism’s five K’s, or articles of faith, known as kakar. It is available in a range of sizes, forms, colours, and wood types. Short fine teeth are seen in some kangas, while long wide teeth are found in others. Sikhs don’t shave their heads.

A kara, or obligatory articles of faith in Sikhism, is an all-iron bangle or pure steel ring worn on the right arm’s wrist. The kara is not regarded as a valuable piece of jewellery. While only one kara is necessary to be worn and is often worn on the right wrist by both genders, additional karas may be worn on both wrists if desired.

Kachhera is a loose undergarment worn by Sikhs, and it is one of the five Ks, or essential articles of faith, known as kakar in Sikhism. It’s made to move freely while remaining modest, whether you’re sitting cross-legged for worship, doing seva, or practising martial arts.

A kirpan is a ceremonial short sword worn by an initiated Sikh and is one of Sikhism’s five kakar, or articles of faith. The kirpan symbolises the Sikh warrior’s concept of defending the weak against tyranny, injustice, and forced conversion. In the past, the kirpan would have been a war weapon. Before degh and langar are eaten, the kirpan is used to bless them.

The Guru Granth Sahib is the Sikh sacred book. Guru Gobind Singh, the tenth Guru, predicted that there would be no more living gurus after him. Sikhs could instead consult their sacred book for instruction. Sikhs refer to their holy book as a Guru for this reason.

The Guru Granth Sahib is a compendium of teachings from the 10 gurus, and also saints from the Sikh, Hindu, and Muslim faiths. It is written in Punjabi and is regarded as the living word of God by all Sikhs. In the Sikh house of worship, it is kept on a raised platform under a canopy. When they are near it, all Sikhs remove their shoes.

Guru Nanak, the creator and spiritual leader of Sikhism, created the religion in the early 15th century. He was a staunch believer that everyone is born equal and should be given equal opportunity.

Guru, which means “spiritual leader,” led his people in the direction of God’s will, or Hukam, thinking that there’s only 1 eternal God to whom we were all accountable. Sikhs number in the millions around the world, and religion is open to everybody.