What is the significance of the different colors of the Sikh’s turbans?

For Sikhs, the turban is an integral part of their identity, and it is unthinkable to remove it. The turban has a spiritual role, as mentioned above, in that it represents the Sikh belief in equal rights, humility, and God’s sovereignty, but it also has a practical purpose in that it covers and keeps a Sikh’s uncut hair in place. The turban is an element of belief, not a religious icon. Symbols are nothing more than representations of real-world objects. The turban has religious connotations, it is so much more than that. The Sikh’s ethnicity is expressed in the turban they wear.

Even though Sikh turbans are usually white, black, blue, and yellow/orange, many Sikhs wear a variety of colors and hues to suit their tastes. It’s a personal decision. Sikh turbans come in a variety of styles, each of which is chosen based on personal choice. If you wonder how they choose their color or can they choose any color they want to wear as their turban then we will discuss and know about colors and their values in Sikh culture through this blog.

The Turban material is available in every color and pattern imaginable, but the three most popular colors are white, deep blue, and saffron orange. The majority of men and women nowadays match the color of their turban to their dress and vice versa.

Let’s explore more regarding the colors of turbans and the significance of different colors in a Sikh community: 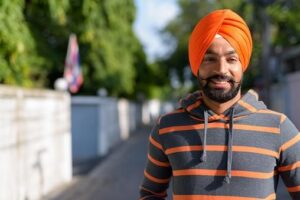 The colors of the Sikh Khalsa are orange and blue. The blue symbolizes a ‘fighter,’ someone who will defend their faith and the righteous. It also acts as a reminder of prior generations’ courage and resistance to oppression. Both orange and blue serve as symbols and reminders of Sikh history and battles in which they were used.  On either aspect, the color orange is associated with knowledge. Since the first Guru Nanak Dev Ji educated us all that “we are all one, we are one with God, and God is a part of us,” Sikhi has been steeped in wisdom. Orange also symbolizes boldness and intelligence, which are two virtues emphasized in Sikhism. Orange is frequently paired with blue because it can represent sacrifice and strength. As a result, blue and orange will be particularly recognized and donned at religious remembrance and precepts, as the colors reflect a community, generating a sense of belonging and unity. 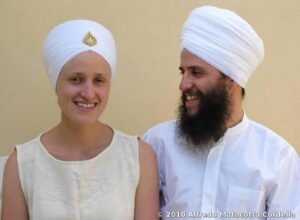 White turbans are used to spread the atmosphere and the person’s projection because white is brilliant, simple, yet reflecting; it represents repelling negativity, being radiant, and pure. White is frequently connected with physical cleanliness and mindfulness, allowing one to focus on their thoughts and deeds. This enables a Sikh to have a clear mind, allowing them to focus on God and their spiritual essence. In Sikh Kirtan events, white turbans are occasionally worn flanked by white clothing to allow for more energy flow because white multiplies the intensity of our magnetic wave, developing a sense of good and powerful energy between individuals.  Because of its simplicity and calm, more older people will begin to wear a white turban. 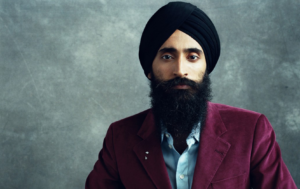 Turbans in black are very popular since the color is simple and can be used with almost any clothing. Black, on the other hand, indicates the ego’s resignation and humility. Because this is a virtue taught in Sikhism, black turbans serve as a reminder to live this way. 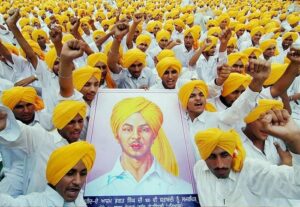 Yellow is a cheerful color that represents sunshine, joy, and happiness. It reveals one’s identity and who they are, allowing them to learn and acquire insight into new information that will aid them in their life journey. Yellow is often connected with liberation and freedom.

Even though there are a variety of turban colors and most are worn in conjunction with apparel, we must understand and teach others about the significance of certain colors and how they affect life values. They can serve as both a lesson of how to live one’s life and a remembrance of Sikh history. 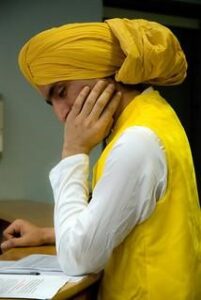 Many people connect the color gold with weddings, but it has a much broader meaning. Gold represents a sense of serenity and healing, which can aid with anxiety and mental clarity. Because the Harmandir Sahib is a place of serenity and meditation, it gets its significance from the Golden Temple. Gold is another popular choice for wedding attire. 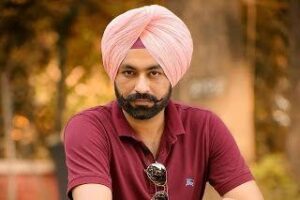 Turbans in pink and red are common during weddings; they are traditional clothing for the bridegroom, and the colors are seen to be fortunate for the marriage, representing a fresh start loaded with wealth. Furthermore, the colors might have meanings other than marriage, such as strength and courage. It is not necessary to wear red or pink, and many people will choose the color of their turban based on their and the bride’s attire.

Any color design is permitted in general. The majority of men and women match the color of their turban to their attire and vice versa. Color preference can be as individual as the person. The turban cloth is available in nearly any color shade or hue. There are a variety of patterns to pick from for those who are more creative. Although there are some widely accepted color choices for specific times, individual preferences may vary. There are no restrictions on which colors or patterns can be worn.

“You may take off my head, but not my turban,” the Sikh Nation said collectively. When many people abandoned their turbans, those who proudly wore them, even if it meant certain death, understood their importance. After all, it is in the face of hardship that one’s faith is put to the test, and one must demonstrate that one’s essential principles are real. Sikhs wear their turbans to serve as ambassadors for the Sikh faith and to commit to following the path given forth by the Sikh Gurus on the outside. True submission takes place internally, of course. As a result, the Turban is the soul of all Sikhs, and they proudly wear it.