Guru Gobind Singh, the head of the Sikhs in Punjab under the Mughal empire (1526–1857), had four sons, the Sahibzade Khalsa warrior princes. Gobind Singh founded the Khalsa in 1699 to safeguard the defenseless from religious persecution. The Khalsa is an elite military organization of initiated devoted traditional Sikhs. Ajit, Jujhar, Zorawar, and Fateh were Gobind Singh’s three wives and four sons. His four sons were all inducted into the Khalsa and were all assassinated by Mughal soldiers before reaching the age of 19.

As “Char Sahibzade,” the four princes of the Khalsa warrior organization, Sikhism praises Guru Gobind Singh’s heroic martyred sons in the ardas hymn for their valor and sacrifice. As sacrifice is a notion that runs through most of Sikh history, the chaar sahibzaade had one of the most compelling tales. The legends of the chaar sahibzaade were repeated to me numerous times as a young Sikh to encourage bravery, resilience, daring, and dignity. What could anyone say about youngsters as young as five, eight, fourteen, and eighteen years old dedicating their lives for the safety of the Sikh panth, if the other tales of sacrifice appeared overwhelming or unrealistic. 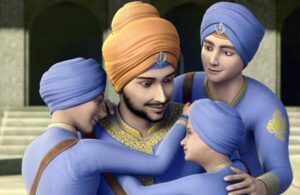 The 2 older sahibzaade were both in Chamkaur with their father, where a tremendous war between Sikhs and Mughals was raging. The Mughal emperor Aurangzeb had set a bounty on Guru Gobind Singh’s head, expecting to put an end to the Sikhs’ presence once and for all if he would assassinate their Guru.  The Sikhs were invaded by the Mughals while relaxing in a fort in Chamkaur. Guru Gobind Singh’s two older sons, Ajeet Singh and Jujhar Singh, witnessed as Sikhs offered their all to save those inside despite being outmanned. When they asked their father for consent to fight, they knew there could only be one outcome.

Nonetheless, all of the Sikhs with Guru Gobind Singh understood that it was in the panth’s best interests to martyr themselves in order for the Guru to flee and rejoin the rest of the Sikhs. These two young spirits dedicated their life to battle, standing against the Mughal army, which had tried hard to put a stop to the Sikhs’ heritage, only fanning the flames with the sacrifice of young teens. 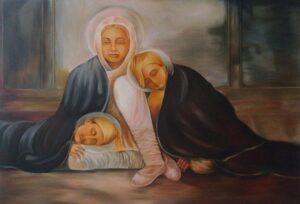 Guru Gobind Singh Ji’s mother, Mata Gujar Kaur, and two younger sons, zorawarr Singh and Fateh Singh, had entrusted their belief in an old acquaintance after being isolated from the other of the Sikhs, only to be delivered over to the Mughals for settlement money. The local Nawab Wazir Khan entrusted oneself with the mission of turning the younger sahibzaade to Islam or murdering them while they were held imprisoned in a tower in Sarhand. They turned to their grandma Mata Gujar Kaur Ji for courage when they were only five and eight years old.

She reminded them of their ancestors’ courageous forefathers. Guru Tegh Bahadur Ji, the ninth Sikh Guru, had sacrificed his life to save an overall community of Hindus. She bolstered their faith by reciting Gurbani (Sikh hymns) and remembering the Creator. They became resolute in their disciplines and uncompromising in their dedication to their faith after being reminded that their entire goal—which Sikhs believe is the objective of all Creation- was to reconnect with the Creator.

When Wazir Khan summoned them to his court, he offered them wealth and contentment in exchange for converting and abandoning their Sikhi faith. The Sahibzaade stood firm in the face of these tyrants’ threats for so many days, until the Nawab eventually determined that sacrifice was the only alternative. He had the younger Sahibzaade bricked alive and then their head cut off when the bricks did not choke them quickly enough, summoning for his most ruthless assassins who might otherwise execute such young and innocent boys.

The Sahibzaade sung hymns and honored the Creator all through the process, drawing tears to the eyes of all who observed it. Mata Gujar Kaur Ji remained alone in the frigid tower, having endured the martyrdom of her spouse and four grandchildren. She awaited the news. When she learned of her youngest grandchildren’s martyrdom, she was thrown to her death from the tower, and she soon joined them. She produced the sacrifices that motivate Sikh adolescents and adults to this day. She was a bold woman who spurred courage in everyone that was impacted by her beliefs.

For Sikhs, history is a long tradition of martyrdom, sacrifice, and adversity; most importantly, it is a history of dedication and faith in the face of adversity. Our religion and discipline came first, yet when wealth was presented for our heads and children’s inheritance became their mortality before they reached maturity. Our Gurus had taught us the importance of being genuine and honest above everything else. These teachings remind us that we all share the same Creator and that it is only through acknowledging that Heavenly Light that we may find harmony among the diversity. 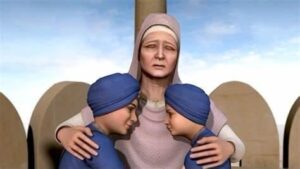 On January 26, 1687, Ajit Singh was birthed. Guru Gobind Rai’s eldest child, Sundari, was born in Paonta to the guru’s second wife. On December 7, 1705 CE at Chamkaur, Ajit Singh was martyred at the age of 18 after volunteering to leave the beleaguered fortress with five Singhs and fight the war on the battleground.

On March 14, 1691 CE, Sahibzada Jujhar Singh was birthed. He was Guru Gobind Rai’s second eldest child, born with his first wife Jito. Jujhar Singh was slain at the age of 14 on December 7, 1705 CE at Chamkaur, where he gained the nickname “Crocodile” for his ferocity in combat when he consented to escape the embattled castle with five of the last Singhs alive, and they all attained immortality on the battleground.

On November 17, 1696 CE, Sahibzada zorawar Singh was born. He was Guru Gobind Rai’s third son, born to his first wife Jito. Sahibzada Singh was slain at the age of six. With their grandmother, Mata Gujri, Guru Gobind Singh’s mother, Zorawar Singh, and his younger brother Fateh Singh were apprehended. The sahibzade and their grandmother were incarcerated and executed by cruel Mughal emperors who sought to suffocate them inside a brick wall.

On Wednesday, February 25, 1699 CE, Sahibzada Fateh Singh was birthed. He was Guru Gobind Rai’s youngest son, born to his first wife Jito. Fateh was martyred on Sirhind Fatehgarh when he was six years old. Fateh Singh and his brother were able to escape being bricked up alive, but they were later ordered to be beheaded. Mata Gujri, their grandmother, died of shock in the jail tower.