Guru Nanak and the Queen of Black Magic

Guru Nanak journeyed all across India to preach the faith of God, and he did so on foot. He arrived in Hajipur after passing through the area where the current city of Patna now exists. He arrived at Malda after crossing through Kantnagar. Malda was located at the confluence of the Ganges and Mahanadi rivers. A local Malda businessman is said to have performed a wonderful service for the Guru for which he gained the Guru’s blessings. Dhubri, Assam, would have been the next stop.

After Dhubri, he continued along the Brahmputra River to Kamrup, a town near Gauhati today. Many old historical Gurdwaras with ties to the Guru can be found along this route. Kamrup was controlled by a woman who wielded dark magic. She had assumed the name Nurshah, the name of the person who had taught her this skill. In that area, she and her female colleagues practiced dark magic and exorcised unusual powers. She ruled the entire land, and many a mystic, yogi, and other spiritual beings fell victim to her mystical plots.

Bala and Mardana, his constant associates, always accompanied him on his journeys. They were formerly in Kamrup, a distant section of India where the locals were known for their dedication to black magic. Guru Nanak took a seat under a tree on the edges of the city and started meditating. Mardana walked into the city to find meals and drinks whilst Bala remained with him. 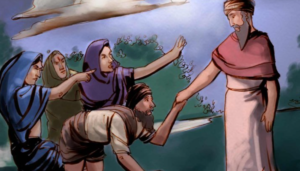 Mardana discovered the city well and began filling his jars with water. Some girls noticed him and were inquisitive about him while he was there. They inquired as to his identity and origins. However, because he spoke a different dialect, they thought he sounded odd when he responded. “He sounds like a sheep, he’s bleating like a sheep!” exclaimed one of them. “Let’s transform him into one!” exclaimed one of them as they both chuckled. So she used a thread around Mardana’s neck to perform magic on the unwitting Mardana. He jumped to his knees and began bleating, “Baaah, baah, baah.” The people in the audience began to laugh.

When Guru Nanak realized that there was something wrong with Mardana, he began heading towards the city. When the magic girls noticed them approaching, they decided to convert them into animals as well. “Bark like a dog!” she exclaimed to one of them who sought to cast a spell on Guru Nanak. But it did not affect Guru Ji. Nevertheless, the magic backfired, and she started barking like a dog. The second girl attempted to defend her companion by raising her arm to perform a different spell, but her arm simply froze in the air, preventing her from moving it. The girls attempted several additional spells, but everything they did backfire on them.

A woman who was observing became worried and ran to inform the Queen of Kamrup. The Queen was a formidable sorceress. She arrived in the city to see what usually occurring for herself. Her sisters’ power had been completely suppressed, which shocked her. She attempted to help them using magic, but it was ineffective! Nurshah noticed the Guru approaching and attempted to entice him with her charms, but her sorcery failed.

She discovered that her spells were ineffective. The Guru recited the following Shabad on Kuchaji, or the lady of violent nature, in response to their futile efforts. Nurshah imagined she would lure the Guru with money after the Guru said these Sabads. Her attendants presented him with pearls, diamonds, gold, and silver. “O mighty magician, embrace me as thy apprentice and teach me thy magic,” she implored. The Guru turned down all of the gifts and recited another Shabad. Nurshah eventually gave up and told Guru Nanak, “You’re a fantastic conjurer! Please set my sisters free and show me how to use your magic!”

Guru Nanak Sahib Ji, who is always kind and compassionate, immediately let the girls free. ActuHetinued, they were confined by the consequences of their magic. “The actual magic is devotion upon God,” Guru Ji continued.

The Queen of Kamrup knelt at the Guru’s feet, begging him to remain so they might serve him honorablyisten, you have exploited your abilities for mischief,” he said, assuring them that he would stay. You have not aided anyone. Instead of deceiving people, focus on saving them. God resides within every one of us. People should be given that. Carry out your responsibilities well. People should be shown, love. In your hearts, meditate on God, and bring this warm, loving God into every home.

When you drop your bodies and enter the next dimension, you will be in bliss. It will give your soul pride and the world brightness.” The Guru assured them that if they diligently repeated God’s Name, performed their domestic chores, and renounced magic, they would be saved. They are claimed to have become Guru’s disciples. He withdrew after a brief stay, leaving the enlightened souls behind to continue his Divine work. Women’s attitudes altered after that, and Kamrup had become a spiritual center of great empathy.

The location that man once dreaded has transformed into an extraordinary source of love and enlightenment. They all avoided practicing. Queen Noorshah became a devout disciple who led her people with compassion and kindness.

The special treasure, she recognized, was not in her spells, but in the dedication. Only the greatest of spell casters in the universe is love and compassion. This is how good won over evil and changed the aura of fear with bliss. Guru Nanak Dev Ji always believed in compassion and devotion to God this way he has taught a lesson to many people and taught them how good deeds can lead them to the true reality of happiness and peace.