The Turban in Sikhism : Importance & History

Dastars or turban headband are a significant chunk of the Sikh identity. Both women and men might wear turbans. Like the articles of faith, Sikhs regard their turbans as presents offered by their beloved gurus, and their meaning is pretty personal. In South Asian culture, wearing a dastar typically indicates one’s social status – rulers and kings once wore turbans. The Sikh gurus accepted the turban, in part, to remind Sikhs that all persons are equal, sovereign and ultimately royal too.

As per to the religious texts of the Sikh religion, the followers should wear a turban and not cut out their hair. The style of a Sikh dastar and how it is tied is very distinct from dastar styles in other cultures. You’ll find there are many manners to tie a Sikh dastar, and you can personalize yours based on your taste.

What is the history behind the Sikh dastar or good to say turban?

Because it’s not just a dastar, it’s a big crown and all Sikhs are Sardars.

It was codify by Guru Gobind Singh in declaration of jurisdiction and eminence despite the reality that only kings at the time wore dastars. We can see that dastar means royalty.

Dastars are one manner that Sikhs are pretty recognizable and distinct (Niara). Guru Gobind Singh offers his blessings to all Sikhs who remain Niara.

The dastar also houses and safeguard the uncut kesh knotted on the top of the head. The hair is tied at an significant spiritual center on the body – the Dasam Duar (7th Chakra), and the dastar carries the hair. The dastar do criss-cross pressure points on the temples which support a human to be centered and calm.

Why I wear a turban head wrap?

As Sikhs we all understand the spiritual basis for wear out a dastar on ours heads; protection of hair. And it provides us a unique identity. And this is fairly true. But not everyone is like that. What I mean to say is that When you wear turban every early sunshine, I identify it will safeguard hair all day long, and it even may make you look unique in between a thousand individuals, but above that you have somehow generate a emotional link with your turban.

When People wear turban just for safeguard of their hair, they might forget its importance. What I mean to relate is that it isn’t respected as it must be. I see individuals coming household remove out their pagri and normally throwing it on the bedside, like all other pairs of dresses. It doesn’t much matter if dirty dresses are touching the pagri or socks are kept near the dastar. Also when Sikhs don’t develop a bond with their turban they wear it like a pair of socks, they don’t make good effort. When you take off turban, it must lies in perfection, and some individuals just put it back on like a Cap on the Head. No attempts to tie it again.

Turban is a very strong thing. It will safeguard you from danger, save your hair, the gift of Waheguru, and it teaches you moral values. Each fold of the turban is like a lesson, Justice, Helping others, faith, maya, ego. Its not a bunch of clothing, its your armor.

Please respect the turban. Fix it properly in a accurate Place. Always tie the dastar, not wear it like a cap.

Although Indians have been wearing dastar since very old times, with the arrival of Sikhism , Dastar assumed an significant mark of opposition to the Mughal invaders.

Right from its inventor Guru Nanak all Sikh Gurus wore dastars. Sikh Gurus stress on wear out dastars strictly since they needed Sikhs to safeguard the rich heritage of the nation in spite of a prohibition by Mughal rulers.

During Muslim invasion from foreign nations, India was conquered. But, Determined Hindus especially the fighter classes of Gujarat, Rajasthan, and Maharashtra etc. did not accept the instructions of foreign rulers and kept their heads covered with dastar to maintain their heritage.

Sikhs in North India do kept their dastars unbroken as part and parcel of the dress code. Thus they rebel against the orders of the foreign rulers to preserve and maintain the older Indian heritage and honour despite having to lay down their existence and hecatomb lots of blood to maintain the honour.

The dastar thus became an article of a Sikh’s nation, race, politics, creed and religion. Because of their perfect behaviour, a turban wearer Sikh started to be respectfully addressed as Chief or leader in the country.

For the Sikhs their dastar is an integral chunk of the dress, their identity and a constant nudge of their duty to the Gurus. It expects the wearer to live up to a great standard manners. It is also denoted a symbol of honour and courage.

What is the history of turbans?

The turban’s exact origin is pretty unresolved. A dastar-like garment, found on a royal Mesopotamian sculpture dating to 2350 B.C., is faith to be the early known example, providing evidence that the garment precede the Abrahamic religions.

Why is the dastar an significant chunk of Sikh culture for men?

Their Sikh faith ban them from cutting their kesh, as their kesh is regarded sacred. Sikh men wear dastar to protect their hair; the dastar do contain a symbolic value of their own. Men do grow beards. … The kirpan act for the fight against unfairness, as per to the Sikh Coalition.

What is the reason for a dastar?

First and foremost, the basic obvious reasoning why Sikhs wear dastar is to define their faith. It is a manner of expressing unity and brotherhood among fellow Sikhs. The crown or the skull of the head is a censorious chunk of the body.

What was the significance of dastar in the older days?

Since ancient times, turbans were connected with the Sikh Gurus, Peshwas, Rajas, Maharajas, and Islamic leaders, as a symbol of their morality, respect, kingdom and honour.

Sikhs
While the dastar is a fashionable and common item of clothing for many traditions, for Sikhs, it represents there believe. When the Sikh faith was generating from the 15th through 18th centuries in South Asia, the dastar was worn only by the elites of society and high classes.

What do the different colors of Sikh dastar denoted?

Sikh dastar are distinguishing in how tightly they are knotted. The color of the turban is important — a blue turban mean a soldier, while orange color is for wisdom. Black is practical and common, especially for those living in cool climates. Dastars are exchanged as a sign of friendship and respect as well.

What is a Sikh turban denoted?

pagri
Sikh men wrap their long hair with a dastar familiar as a pagri, a practice that typically takes few time. Sikh boys knotted their hair in a tiny under-turban named as a patka, with their hair wrap on top of their head.

What are the different kinds of dastar?

Among the Sikhs, the turban is an article of believe that represents piety, sprituality, courage, self-respect, honour, and equality. The Khalsa Sikh women and men, who keep the Five Ks, wear the dastar to cover their long, uncut kesh. The Sikhs regard the turban as an significant chunk of the unique Sikh identity. 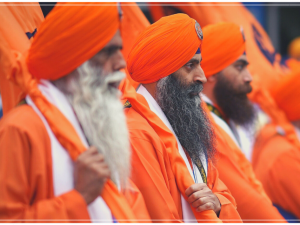 Can anyone wear a turban?

YES. The reasons behind wearing a dastar might differ, but the style is open to anyone! Some human wear a head wrap (head cover) or dastar for religious reasonings. … You also have individuals that wear a dastar to hide hair loss from their cancer treatment and alopecia.

What is the practical motive of a turban?

The dastar protects the hair and keeps it clean. As Sikhs form Canada’s population and of Indias population, their dastar help identify them. When he institutionalized the dastar as a chunk of the Sikh identity, Guru Gobind Singh says out in the past, “My Sikh will be acknowledged among millions”.

How old is the dastar?

Nobody identify the accurate origins of the turban, although there are testimonial to it dating back almost thousand years from ancient India and Mesopotamia.

Do Sikh eliminate their turban?

There is no guideline or “maryada” guiding the removal of dastar. But on sweeter note a Sikh is expected to cover her/his head when going out just as to safeguard hair from dirt, etc. as usually we wash up our hair once a week.

What was the Colour of the baby turban?

Can you be a Sikh and not wear out a turban?

For Sikh women, life is easy to this count as a dastar is optional for them. However, even without a dastar, belong to the Sikh faith or having brown skin can hamper or even disqualify their involvement in conventional activities.

Who invented the dastar?

The turban customarily cover up the whole head, conceal the hair from view, and sometimes the cloth is wrap up around a turban cap rather than straight away around the head. Some experts faith that the dastar invented in modern-day Iran, persia, while others think that it was originated by the Egyptians.

What does the red turban denoted?

Red and pink turbans are often worn out at weddings, it is a traditional clothing for the groom, with the colours being regarded auspicious for the marriage, shows out new beginnings fill up with success.

What do you mean by the metal ring on a Sikh turban?

A flat steel ring with a razor outer edge, the chakar is sketched to be thrown with a revolving motion. As per to accounts by soldiers and foreign travellors traveling in Sikh territories in the 19th century, the chakar was impactful at distances as great as fifty yards when toss by an experienced warrior.

Why does Sikh wear white?

Orthodox Muslims, Jews, and Sikhs follow the guidelines with fashion flair. … Although American Sikhs dress in white, which indicates pureness of spirit and concentrate attention to the spiritual path, Khalsa says, they are allowed to individualize their looks with various styles, accessories and shades of white.

What is the proper name for a turban?

another word for turban are-

What is a turban denoted in Punjabi?

A Punjabi Pagdi is a kind of dastar worn by the Punjab natives, as the name suggests. A Punjabi pagdi, also named as Pagg in the Punjabi language, is substantially produce by tying yards of cloth and wrapping, generally construct of chiffon, cotton or silk, around the head of the human who is meant to wear it.

As it’s regarded admiring for Sikhs to keep their heads conceal when in public and in our religious spaces, the dastar offers that function as well. Sikhs suppose not to cut hair from any chunk of our bodies, which is why as a Sikh man you might have a long hair and long beard too.

But I have a buddy who is a Sikh and does not wear a dastar. Why not?

Like any community, there is a range of practice. Many rooters of the believe don’t wear turban but still purely follow and identify with the faith.

The turban is not a hat per se, and we do not wear it like a hat. The Sikh dastar is a long piece of cotton, typically one to two yards wide and up to six yards long. Your mileage might vary. Mine certain does.