The Sikh Regiment is an Indian Army infantry regiment with 19 battalions that recruits mostly from the Sikh population. The regiment’s initial battalion was established immediately before the British Empire’s takeover of the Sikh Empire on August 1, 1846. It is presently amongst the most honored regiments in the Indian Army, which is also one of the most recognized regiments in the British Empire at one time. The Sikh Regimental Centre is situated in Ranchi’s Ramgarh Cantonment of Jharkhand in India. The previous location of the Centre was Meerut, Uttar Pradesh.

The regiment, which has been in existence since the end of the Anglo-Sikh War, is the most honoured of all battalions, having battled conflicts and wars all over the world, from the far east to Europe. Everybody in India is aware of the Sikhs’ valour. The Sikhs are properly and rightfully regarded as remarkable guardians of the country, renowned for their unyielding courage and great sense of patriotism.

Enlisted troops are recruited solely from the Sikh community and are taught directly by the regiment, where they will spend the most of their service. Officers assigned to the Sikh Regiment are taken from all regions and areas of India. Although officers are schooled outside from either the IMA or the NDA and tend to depart the regiment subject to advancement, officers allocated to the Sikh Regiment are recruited from all regions of India.

The regiment’s history spans 154 years and includes several unrivalled acts of courage which will never be erased. The regiment’s first battalion was organised shortly before the British takeover of the Sikh Empire in 1846. The regiment’s legacy, according to popular belief, has its foundations in the Sikh Gurus’ teachings and sacrifices, as well as Maharaja Ranjit Singh’s Khalsa Army’s courage. 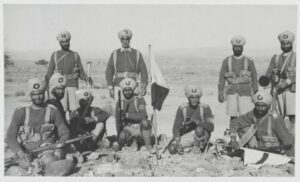 The Sikh Regiment’s history is intertwined with that of the Punjabi Sikhs. Sikhism was founded in the province of Punjab, which was seen as a crossroads of cultural and religious influences from the Arabic West and the Mathra East all through the religion’s development. As a result, the areas of Punjab were fought over by both areas of influence, whether through magnificent cultural impact or by violent means. Punjabi culture was acknowledged as a third phase by the fifth Sikh Guru Arjan Dev, and autonomous Punjabi culture blossomed with the new religious movement; as a result, Punjabis who followed Sikhism was sought as a rival of Islamic influence. Sikhs were motivated to keep a degree of martial tenets because Sikhism was persecuted for religious convictions.

The Sikh Regiment was formed on August 1, 1846, when Captain G. Tebbs and Lieutenant Colonel P. Gordon raised the Ferozepore Sikhs and the Ludhiana Sikhs, respectfully, and were utilised to powerful effect in the 1857 Indian Rebellion. The Sikhs benefited greatly from the outcome since their commitment and battling prowess made them the core of recruiting for the British Indian Army, which had previously been selected from South Indian districts. The Sikhs received their first two combat honours during this battle, for achievements during the siege of Lucknow and the defence of Arrah. In addition, the Sikh Regiment was given one rank of seniority above other Indian Sepoys, as well as permission to wear the modified red turban (which the unit still wears currently), rather than the usual blue headdress carried by British Indian Army units at the time.

In September 1897, four Sikhs were stationed in the Khanki Valley on the Samana mountain in Pakistan’s North-West Frontier Province (NWFP).   With picquets at Dar, Sartope, Sangar, Carg, and Saragarhi, the battalion occupied Fort Lockhart in two groups. Saragarhi was by far the most significant of all the piquets because of its location at the maximum height between Fort Lockhart and Gulistan. The Saragarhi piquet was held by twenty troops under the leadership of Hav Ishar Singh.

The attack was originally repulsed, with the enemy losing nearly 60 soldiers. Lt Col J Haughton, the Commanding Officer at the time, made every effort to keep Saragarhi under control.

The unit, however, was compelled to retreat at first because the Germans struck Saragarhi frequently. The Sikhs did not retreat from the fort without losing their heart. Before tribesmen set the guardroom on fire and burned him to death, one Sepoy grabbed charge of the guardroom and shot down at least 20 adversaries. By 3 p.m., personnel and ammunition were running low, so the assailants set fire to the battalion post. As a result, before making the ultimate sacrifice, the valiant Sikhs murdered 450 barbarians.

When the Saragarhi Braves were informed, British Parliament paused the proceedings and gave them a standing ovation. Each hero received the Indian Order of Merit, which is the highest honour bestowed upon an Indian soldier in the British Indian Army. 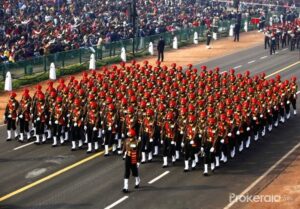 All battalions of the prestigious Sikh Regiment now commemorate September 12 as “Saragarhi Day.” This conflict is one of eight worldwide noted for collective bravery, according to Unesco.

The Sikh Regiment was also utilised by the British Empire to garrison India, defend Indian frontiers (such as the North-West Frontier Province), and participate in overseas expeditions as the Hong Kong operations. Sikh regiments were sent as part of the British Indian Army for World War I operations by 1914.

Achievements and Honors of Sikh Regiment 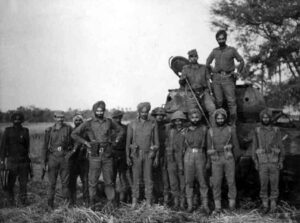 The Regiment has 1652 gallantry honours and accolades to its name, including 10 Victoria Crosses, two Param Vir Chakras, 14 Maha Vir Chakras, and 68 Vir Chakras. It has also received 73 battle honours and 38 theatre honours, in contrast to four COAS Unit Citations and two “Bravest of the Brave” citations. L/Nk Karam Singh won the Param Vir Chakra in 1948 during the Kashmir battles and Sub Joginder Singh won it in 1962 against the Chinese Invasion.

When the 1st Sikh battalion was turned into the 4th mechanised infantry in 1979, it was the British Commonwealth’s most decorated battalion (245 pre-independence and 82 post-independence gallantry decorations).

According to the Defence Review annual for 1995-1996, the Sikh regiment in the Indian army’s most decorated regiment.