Bhai Taru Singh, a Sikh warrior, was a Sandhu Jatt from Puhia hamlet in Punjab’s Amritsar area. He was a devout Sikh who followed the Sikh Gurus’ teachings, toiled his property constantly, and invested wisely; despite not being wealthy, he had always been cheerful and did much for his Sikh brothers and sisters. Everything he could spare went to his Sikh brothers and sisters who had been expelled from the country due to government oppression. Taru Singh was apprehended by Zakariya Khan, the governor of Punjab, who was headquartered in Lahore, after he was observed on by Akil Das (also known as Harbhagat Niranjania) of Jandiala, a government informer.

Bhai Taru Singh was born in Punjab under the Mughal Empire and was reared as a Sikh by his widowed mother, Bibi Dharam Kaur, after his father, Bhai Jodh Singh, perished in the war. Sikh rebels had taken sanctuary in the woods during this time, plotting the overthrow of the Khan. These Sikh soldiers received food and other supplies from Bhai Taru Singh and his sister, Tar Kaur (Taro) Kaur. Both of them were charged with treason after Akil Das notified the government about them. While the villagers paid for his sister’s liberation, Bhai Taru Singh declined to obtain a pardon.

“From where do the Sikhs acquire their food?” Zakariya Khan allegedly questioned his warriors, according to the Prachin Panth Prakash. I’ve forbidden them from working in any capacity. They are not aware of any taxes. They are not allowed to farm, own a business, or work for the government. All offerings to their gurdwaras, or places of prayer, have been halted. They have no access to provisions or supplies. Why don’t they perish from starvation?” 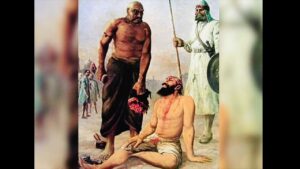 “There are Sikhs on this planet who would not eat till they have nourished their compatriots,” Harbhagat, a sworn enemy of the Sikhs, said. They may go without food and clothing personally, but they cannot stand the suffering of their comrades.

They’d spend the winter by the fire and send their clothing. They would work up a sweat grinding corn and have it delivered to them. For their own sake, they would perform the most arduous task to earn a pittance. They relocate to far-flung locations to support their exiled brethren.

“One Taru Singh lives in the village of Puhia in Majha,” Harbhagat said. He cultivates his property and pays his taxes to the authorities. He eats sparingly and sends everything he can to his forest brothers. His mother and sister both work hard to make ends meet. They eat in moderation and dress in the coarsest homespun. They pass on everything they save to their fellow Sikhs.”

The arrest of Bhai Taru Singh

Bhai Taru Singh was caught, incarcerated, and tormented as a result of Akil Das’ complaint. When he was finally brought before the governor, he saluted him with the Sikh greeting: Waheguru Ji ka Khalsa, Waheguru Ji ki Fateh. “If we cultivate your land, we give the revenue,” he said when accused with sedition. We pay taxes if we conduct business. After we’ve paid you, what’s left is for our stomachs. We give to our fellows what we save out of our mouths. Nothing is taken from you. So, why are you punishing us?”

In a fit of fury, the governor declared the customary options: Islam or death. “Why must I become a Mussalman do they never die?” Taru Singh calmly inquired, quoting again from the Prachin Panth Prakash. Why should I abandon my beliefs because I will die one day, regardless of my religion? which I am proud of? Why should I do something that will bring me into disfavour with my Guru? I would have been conceived to a Muslim family if God had intended me to be a Muslim. My faith is more important to me than my life, and I will fight for it at any costs.”

‘If you convert to Islam, you will be granted a lovely wife from a high Mughal family,’ Zakariya Khan continued. You will be rewarded with wealth and a prominent position. You will have a happy and enjoyable life.

‘If you convert to Islam, you would be given a beautiful wife from a high Mughal family,’ Zakariya Khan continued. You will be rewarded with wealth and a prominent position. You will have a happy and enjoyable life. If you refuse, your hair will be chopped off forcefully and you will be tortured severely. Finally, you’ll be decapitated or killed behind the wheel. You’ve been well advised. Don’t squander your life and everything it has to offer.’ Bhai Taru Singh was adamant in his refusal to abandon his faith. ‘Even if I were granted the throne of the entire world, I would not abandon my religion,’ he declared. It is significantly more valuable and valuable than all of the others.

The manner in which he was executed is a little unclear. Singh is alleged to have been brought before the Khan after a brief period of detention and torture and offered the option of converting to Islam or being killed. Singh will have to cut off his Kesh and deliver it to the Khan as a token of his transformation. Bhai Taru Singh’s scalp was sliced away from his skull with a sharp knife when he refused, in a public exhibition, to prohibit his hair from ever regrowing. This heinous deed is thought to have taken place on June 9th, 1745.

Sikhs say Zakaria Khan was afflicted with excruciating discomfort and the inability to urinate when Bhai sahib was returned to prison to die slowly. He sought advice from his counsellors regarding his unexpected illness, and was advised that it was caused by his mistreatment of Sikhs. He sent an apology to the Khalsa Panth for his persecution of the Sikhs and requested pardontheas the last choice because of the tremendous anguish. His counsellors advised that if Zakaria Khan had his scalp slashed with Bhai Taru Singh’s shoes, his health would be improved. Even though the shoe treated Khan’s illness, he died 22 days later. Bhai Taru Singh went for Sachkhand on July 1, 1745, after learning that he had unexpectedly outlived the Khan.

Taru Singh was only 25 years old at the time. His remain were burneded outside Delhi Gate in Lahore, where a memorial to martyrs known as “Shahidganj” was later built. For the Sikhs, it has become a place of pilgrimage.