On January 26, 1682, Baba Deep Singh Ji was born. Deep’s parents nurtured him with a lot of love and dedication because he was an only child. On the Vaisakhi of 1700 A.D., he travelled to Anandpur, where, after receiving baptism, They began learning weapons and horsemanship from the Sikhs.

He started learning Gurmukhi reading and writing, as well as the understanding of Guru’s words, from Bhai Mani singh. Following a two-year stay at the Guru’s institute.

Baba Deep Singh Ji and Baba Banda Singh Bahadur killed the Wazir Khan, who was accountable for the demise of Guru Gobind Singh Ji’s younger Sahibzade (Guru Ji’s sons) Baba Zorawar Singh Ji and Baba Fateh Singh Ji, as well as Mata Gujar Kaur Ji, in around 1709. Despite the fact that the Muslim army dominated the Sikhs by a large margin, the Sikh army easily defeated the Muslim soldiers. 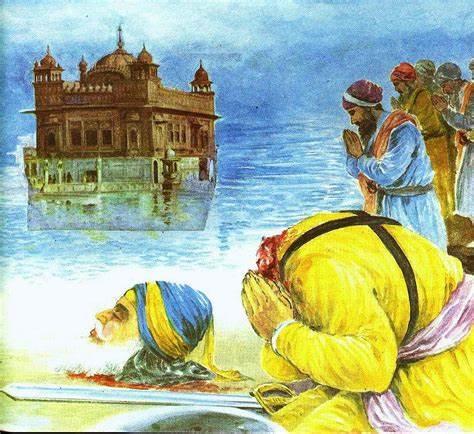 In the final attack with Jahan Khan’s near visible Goharwal, Baba Deep Singh Ji and all the Sikhs battled so valiantly that the foe was nearly destroyed. However, Jahan Khan’s soldiers received troops soon after, and Baba Ji and the Sikhs kept on fighting and pushing to Amritsar.

Both Jahan Khan and Baba Ji slammed their swords with enormous power throughout the battle, killing Jahan Khan and fatally injuring Baba Ji on the throat. One of the Sikhs recalled him of his commitment to die in the Harmandir Sahib’s grounds. He honoured his word by continuing to battle with his 20kg+ Khanda in his one hand while holding his head right up with his left. He made it to the boundaries of Harmandir Sahib, where he died.

Anokhe Amar Shaheed Baba Deep Singh Ji is another name for him. Such a mission could only be completed by someone with spiritual strength.

5. Baba Deep Singh Ji was a multilingual master who spoke Gurmukhi, Sanskrit, Persian, Arabic, and a variety of other languages.

He dedicated himself in his learning of Sikh theology and Sri Guru Granth Sahib, the Sikh holy writings, while at Anandpur Sahib. Even if we learn a language from preschool, it is tough for us to get perfect in it! Imagine being able to communicate in multiple languages.

6. He was also trained the art of horse riding, hunting, arms training, and the use of the arrow (archery) as well as other weapons by Guru Gobind Singh Ji.

He became one of Khalsa Army’s bravest soldiers at the age of 20. Even now, his life provides a good example about how to live as a Sant Sipahi for everyone of us (Saint-Soldier).

Taimur Shah began deconstructing Gurdwaré and dumping trash and booze into the sarovars. When Baba Deep Singh Ji learned about the beadbi and destruction of Sri Harmandar Sahib, he informed the Sangat of Takht Sri Damdama Sahib, saying, “This year, Diwali will be celebrated in Amritsar.” Five hundred Singhs lined up to accompany him.

The sacrifice of Baba Deep Singh Ji inspired Sikhs to keep fighting tyranny for several years. His life continues to set an example for all Sikhs about how to live and say bye to your life with dignity, as well as how to not stand or allow the sanctity violation of Sri Guru Granth Sahib Ji or the Gurdwara.

It is a lesson that we should all learn from and strive to emulate, so that Gurdware and people maintain the privacy and courtesy of Gurmat and Sri Guru Granth Sahib Ji.