Rise and Fall of the Sikh Empire

From 1799, when Maharaja Ranjit Singh seized Lahore, to 1849, when it was attacked and conquered in the 2nd Anglo-Sikh War, the kingdom occurred. It was developed from a cluster of autonomous Sikh misls based on the Khalsa. Maharaja Ranjit Singh ruled the first Sikh Kingdom, which stretched from what is now Afghanistan to Pakistan, North India, and just before China. He was the British Empire’s most vexing thorn. Until they could conquer India, the British had to wait till he passed. He was so dreaded by the British that they did not dare to fight the North West Region of India till his death.

On April 12, 1801, Ranjit Singh was acclaimed to coincide with Baisakhi. The coronation was administered by Sahib Singh Bedi, a descendant of Guru Nanak Dev. From 1799, Gujranwala was his capital. He moved his capital to Lahore in 1802. Ranjit Singh rose to power quickly, from being the head of a single Sikh misl to being the Maharaja (Emperor) of Punjab in just a few years. 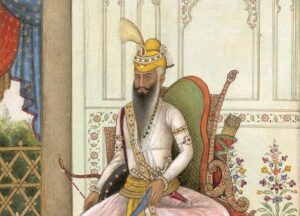 After that, he spent the next several years fighting the Afghans and drove them out of Punjab. He also took over Pashtun lands, including Peshawar. Peshawari Pashtuns were governed for the first time by Punjabis.

He conquered the provinces of Multan (southern Punjab), Peshawar (1818), and Jammu and Kashmir (Jammu and Kashmir) (1819). As a result, Ranjit Singh put an end to more than a century of Muslim dominance in Multan. He also conquered the hill republics to the north of Anandpur Sahib, including Kangra, the largest of which.

Ranjit Singh’s Empire was secular, and no one was prejudiced against them because of their religious beliefs. The Maharaja never compelled his subjects to follow Sikhism.

The Sikh kingdom was unique in that it permitted men from many religions to rise to positions of power. Aside from the Singh (Sikh), significant administrators are the Khan (Muslim) and the Misr (Hindu Brahmin). The Christians were a component of the Sikhs’ militia. In 1831, Ranjit Singh dispatched a team to Simla to meet with Lord William Bentinck, the British Governor-General. The Sikhs were not known for forcing anyone to switch to Sikhism, whether they worked for them or lived in the country they ruled. In truth, the Sikhs and their monarch held individuals of piety from all religions in equal regard.

The Sikhs never committed crimes on the subcontinent like invaders. True, the Sikhs harbored resentment towards the Afghans for the crimes they had committed on them over decades. The Mughals had previously hunted down Sikhs like wild animals in the countryside. A price was placed on the head of every Sikh. During the lifetimes of both Ranjit Singh’s father and grandfather, the Afghans wreaked devastation and mayhem in Punjab. Despite this, there were no accounts of Sikhs being tortured in the manner that they were habitually subjected to by the Muslim rulers of Hindustan and, later, by Afghan invaders. The Sikhs were said to be a very tolerant people. 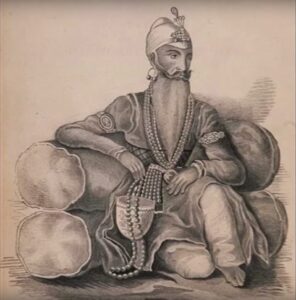 He was generous with his donations to Hindu and Muslim religious institutions. At the expense of the state, he renovated and restored Hindu and Muslim monuments. The Maharaja paid Rupees one lac to a Muslim calligrapher who had translated the Quran in an exquisite hand but had not found a buyer to pay the price of his life’s work.

He had the Muslims’ and Hindus’ holy writings translated into different languages. Ranjit Singh did not declare Sikhism to be the official religion, nor did he change any deliberate efforts to spread it. This was in complete accordance with the Sikh Gurus’ philosophy of peaceful cooperation.

Ranjit Singh, ever the revolutionary, was determined to establish an English school in Punjab, and the assignment was handed to American missionary J C Lowrie, who praised Amritsar and the Golden Temple in his book Travels in North India. In terms of learning and religion, he preferred it to Athens and Jerusalem, and he admired the Gurdwara’s exquisite decoration and architecture.

His successors may have maintained a peaceful empire throughout India and Asia if it hadn’t been for the nefarious operations of his internal sources.

His first marriage was to Mehtab Kaur, the Kanheya Misl’s founder’s granddaughter. This was one of the first moves toward bringing the Misls together. Throughout his life, Ranjit Singh married several women. Both Sikh and Hindu priests participated in Maharaja Ranjit Singh’s cremation rite. Maharani Mahtab Devi Sahiba, the Empress of Punjab, the Princess of Kangra, and daughter of Maharaja Sansar Chand, performed Sati with Ranjit’s body in her lap, and a few of the spouses joined her.

Ranjit Singh’s kindness and complete lack of malice, brutality, or vindictiveness, which were so unusual in his time, were clearly due to the Sikh tradition and ethos in which he had been reared, conditioned, and inspired.

Ranjit Singh suffered from numerous health issues, including a stroke, in the 1830s. On the 27th of June, 1839, he died. His eldest son, Kharak Singh, ascended to the throne, and the kingdom began to fall due to weak governance and political infighting among his heirs. Internal conspiracies and killings killed the Sikh princes, while the nobility sought to keep their authority. Around this period, the Sikh Empire began to crumble. The British and the Sikh Empire fought two Anglo-Sikh wars, the second of which brought the Sikh Empire’s reign to an end. 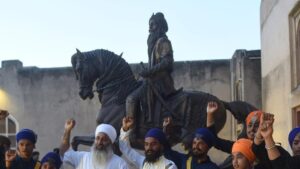 Now that Maharaja Ranjit Singh was long dead, and his mother had been forcibly removed and imprisoned in a Palace outside of the city some time before, Duleep Singh, who was only ten years old, was surrounded by a group of grave-looking men wearing red coats and plumed hats, who conversed in an unfamiliar language. The terrified but dignified boy finally surrendered to the mounting British pressure in the terror of the minute that followed—what he afterward recalled as scarlet day. He signed a formal Act of Submission in front of what remained of his court’s nobles in a public ceremony. Within moments, the Khalsa banner was lowered and the British flag was raised above the fort’s gatehouse.

The Treaty of Lahore, signed by the ten-year-old Maharaja, handed up to a commercial business, The East India Company, the wealthiest area in India, which had previously formed the sovereign Sikh kingdom of Punjab.