Shri Guru Sant Ravidas Ji was a famous Saint, philosopher, poet, social activist, and Lord devotee. He was a renowned pioneer of the North Indian Bhakti movement and among the most renowned and lead stars of the nirguna sampradaya. With his wonderful poetry, he had delivered a range of spiritual and social lessons to his admirers, supporters, and society at large, encouraging them to purify their thoughts and demonstrate their infinite love for God.

Kavi Ravidas had a massive impact on the “Bhakti movement,” which was a “spiritual devotional movement” in Hinduism. Afterward, this cause took on a new identity, and Sikhism was born. Ravidas’ religious verses were incorporated into the Sikh religious texts as Guru Granth Sahib.

Annually on Magh Purnima, the full moon day of the Magh month, Sant Ravidas Jayanti, or his birth anniversary, is commemorated with deep passion and delight throughout India; although, people in Varanasi treat this celebration as a noteworthy ceremony and festivity. 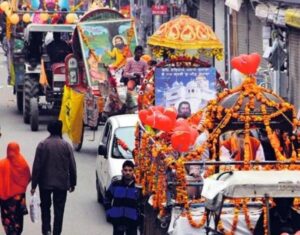 His adherents, on the other hand, founded the ‘Ravidassia’ religion in the twenty-first century. Each year, Ravidasiya devotees respectfully commemorate Guru Ravidas Jayanti. Worshippers undertake numerous ceremonies and chant Guru Ravidas’ songs and poems. All of the followers form a procession carrying Guru Ravidas’ image and bathe in the Ganges. Several individuals also go on a visit to the Ravidas temple to get his blessings.

Numerous devotees and admirers also execute a holy wash ceremony in the Ganga River or other holy spots before worshiping his picture at residence or in a temple. People and worshippers from all around the world travel to Varanasi to take part in the festivities.

Ravidas Jayanti is also commemorated by the Sikh community.  Lights are strung throughout the Gurudwaras, and special arrangements are made. In honor of Guru Ravidas, prayer gatherings are organized. The holy text of Ravidas, “Amritbani,” is read. Devotees hold the image of Ravidas and recite the prayers during processions that take place in various locations.

Nagar kirtan, in which individuals dress up like Saint Ravidas, is held in several regions. To promote his beliefs, plays are also staged.

Sant Ravidas Ji was born in the 15th century in the Seer Goverdhanpur village, Varanasi, Uttar Pradesh, India, to Kalsa Devi Ji and Baba Santokh Dass Ji of the Harijan caste. Some researchers assume that he lived from 1450 to 1520 in the 15th to 16th centuries CE, based on their research.

From his early beginnings, he was courageous and dedicated to God. Later, he suffered from many challenges caused by upper caste individuals, which he experienced, and he used his works to educate people about the reality of life. He instilled in individuals the importance of unconditional love for their neighbors.

Raghu was Sri Guru Ravidas’ wife’s name was Lona, according to history. Ravidas used to work as a shoemaker following family work tradition. Ravidas decided to learn more, so he appointed Sant Ramanand as his guru. He had chosen Sant Ramanand his guru after being inspired by Saint Kabir; Guru Kabir Saheb was his first guru. Because of his lovely demeanor, those who met him were overjoyed. Ravidas was a generous gentleman who took great joy in assisting people. 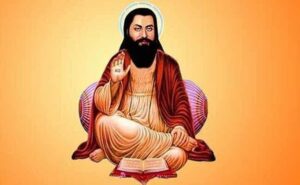 People who are attracted to Bhakti, such as Ravidas, usually take special delight in assisting sages and saints. Ravidas was known for giving away shoes without getting any money. His parents used to be upset due to his personality and behavior. Because they were dissatisfied with Ravidas’ financial situation. Ravidas and his wife were evicted from their home. Ravidas began living with his wife in a rented apartment in a nearby building. And he used to devote the majority of his time to Lord’s worshiping and sages’ and saints’ Satsang.

Guru Ravidas met Guru Nanak, the creator of Sikhism, and was strongly influenced by him, according to most experts. Ravidas is respected in Sikh texts, as evidenced by the inclusion of 41 of his poetry in the Sikh scripture. These poems are one of the first documented sources of his ideas and writings. The scripture was written 170 years after Ravidas’ death in 1693, and it is one of the 17 Saints of Indian faith culture. Both the 17th-century Bhaktmal of Nabhadas and Anantadas’ Parsi have portions about Ravidas. In conjunction with Sikh tradition books and Hindu Dadupanthi customs, the majority of recorded sources about Ravidas’s life, notably Ravidas’s disciples, were created in the early twentieth century, around 400 years after his death.

People believe that God sent Ravidas Ji to the world to defend religion since, at the time, sin was at an all-time high, and people were discriminating against caste and practicing discrimination in the guise of religion. Ravidas Ji heroically fought all forms of discrimination and taught the people the actual essence of faith and caste. He used to tell folks that a person’s deeds are more important than his caste, religion, or belief in God. Ravidas Ji also made significant attempts to eradicate the practice of untouchability from society. People from the lower castes were scorned at the time.

They were compelled to live in a kutcha hut rather than a pucca house in the village because they were banned to pray in the temple, educating in school, or going out in the village during the daytime. When Ravidas Ji saw the condition of the society, he was committed to ending untouchability and prejudice in the society, and he began spreading the right message to all people.

RavJias Ji used to preach to the public that “God created man, not man created God,” meaning that every person is created by God and has equal opportunities on the planet. Sant Guru Ravidas Ji used to educate people about global oneness and acceptance in a variety of ways.