Why do so many Sikhs have the last name Singh or Kaur?

Guru Gobind Singh, the 10th Sikh Guru, established the Sikhs’ distinct identity and granted all Sikh males the surname Singh and all Sikh females the surname Kaur. The motivation for doing so is deeply rooted in South Asian culture. Someone’s last/family name reflects their social standing and caste in that historical period’s caste-ridden civilization, and it still does now. Guru Gobind Singh desired to break down social boundaries and establish an equitable society.

The terms “Singh” and “Kaur” signify “Lion” and “Princess,” respectively. Numerous Sikh families have resorted to using their surname, but Singh and Kaur have remained as middle names. In contrast to taking family names in getting married, the use of Kaur encourages women as individuals with worth and identities that occur independently of their interactions with males.

The Sikh Gurus wanted to eliminate the Indian caste system, which granted rights and dignity to people based on their birth families. Sikhism devotees were encouraged to take common last surnames as part of an effort to eradicate caste discrimination and promote brotherhood among all individuals so that there would be no discernible disparities between those from wealthy and poor backgrounds.

Sikhi was established by Sikh gurus without regard for caste, creed, or sect. They avoided using distinctive last names to indicate this. Nonetheless, because the 10th Guru converted the Sikhs into a martial organization, they adopt the surname Singh to denote their warrior nature. They are also referred to as Sardars to indicate that all Sikhs are capable of leadership.

You will also notice that people are frequently perplexed by Sikh names and are unable to determine their gender. The majority of Sikh names are suitable for both boys and females. It is gender agnostic. This is to demonstrate a sense of gender equality.

The story behind “Singh” and “Kaur”

The honors of Singh and Kaur were exclusively meant for use by Rajputs or Kshatriyas in the previous Hindu community. The 6th Guru and his successors attempted to persuade Hindu Rajputs to execute their customary function of safeguarding the underprivileged against injustice during the early phases of Sikh militarism. The first Sikh soldiers received training by Rajput military tutors only during the time of Guru Hargobind Rai, the Sixth Guru, as a gesture of gratefulness for the latter’s assistance in securing the release of 52 Rajput princelings from the Gwalior prison where they were imprisoned with the Guru. 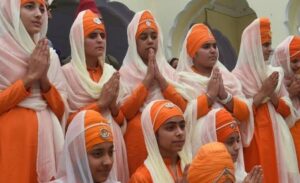 Despite their best efforts to persuade the Rajputs to follow their Dharma, the Sixth Guru and his successors discovered that the majority of the Rajputs of their time were mainly engaged in petty conflicts and conspiracies, and had all but abandoned their duty as Kshatriyas. While they kowtowed to the Mughal emperors in terms of protecting their minor territories, they did not just fail to defend Hindu society’s ranks and order but were frequently involved in the persecution of lower caste Hindus.

After years of diplomacy and coaxing failed to elicit the appropriate response from Rajput monarchs, the 10th Guru resolved to establish an Order in which each initiated Sikh could perform the role of all four castes.

A Sikh must believe in the dignity of labor as a Shudra. As a Vaishya, a Sikh is expected to engage in honest business and labor for the betterment of society. As a Kshatriya, the Sikh is expected to carry weapons and engage in righteous combat. Ultimately, as a Brahman, the same Sikh – who has all varnas at the same time – must recite Sri Guru Granth Sahib and perform priestly duties as needed.

Because every Sikh was also a Kshatriya morally, they were to employ the identities, Singh and Kaur, to establish the Khalsa Raj or Pure Rule. Battling for one’s life as well as one’s religion.

The command of Guru Gobind Singh After the name “Singh,” Sikhs should not add any surnames “. A Khatri, a chamar, a jat, a Brahmin, and a Rajput were the first five (panj pyare) to volunteer to join the Khalsa (holy army). Guru Gobind Singh taught them that they no longer belonged to any caste, regardless of what caste they were before they converted. Now that you’re all Khalsa, you’ll sustain your togetherness by using the common name “Singh.” “..

In addition, he told them a fable. Every day, a donkey was thrashed by its owner to make it a pack animal, a beast of burden. Someone threw a tiger skin over it one day while it was sleeping. Its owner no longer treats it as a pack animal.

It continued to live happily after that because it did not open its mouth. When a  donkey passed by, this fellow began to bray. It was then that the owner recognized it wasn’t a tiger, but rather his previous donkey. He seized it, stripped it of its tiger hide, and thrashed it like a beast of labor yet again.

So he advised his disciples that if you start differentiating among yourselves by preserving caste names after the title “Singh,” the same thing will happen to you. If you accept Guru Granth Sahib to be your Guru, you are technically a Sikh. The word “Singh” is not mentioned in the Guru Granth Sahib. Since then “Singh” and “Kaur” have been an integral part of the Sikh community.

To be Sikh means value Sikhi

Sikhs have always used the surname “Singh” in their names. During the Baisakhi ritual in 1699 AD, Guru Gobind Singh instructed Sikhs to do so. He encouraged Sikhs to avoid referring to themselves by their surnames, which imply a caste structure. If you follow the virtues of God as outlined in the Guru Granth Sahib, you are a Sikh. Many saints, such as Bhagat Kabir Ji, Ravidas Ji, and others, did not have a surname. They are, nonetheless, held in the same regard as gurus and are referred to as authentic Sikhs. It makes no difference what your surname or religion is as long as you are a nice human being.