Bhai Lalu, also renowned as Bhai Lalo, was a very well Sabharval Khatri from Dalla, presently is Punjab’s Kapurthala district, who acquired spiritual training from Guru Angad. He was a good friend of Bhai Paro, with whom he once travelled to Goindval during Guru Amar Das’ reign.

As soon as he saw the Guru, his face lit up with joy. “Lalu, my darling Sikh, hath turned all,” the Guru said, in the words of Sarup Das Bhalla, Mahima Prakash. Lalu was made the leader of a Manji district, which is a preaching district. He is said to have superhuman abilities, particularly as a healer, according to legend. His memory is commemorated by a Gurdwara in Dalla.

Bhai Lalo made his living via hard effort. He was born in the village of Saidpur around 1452. (Pakistan). His father’s name was Bhai Jagat Ram, and he came from the ‘Ghataura’ carpenter tribe, which is today known as Ramgarhia.

Saidpur was the very first village Guru Nanak and Bhai Mardana visited after leaving Sultanpur during their first lengthy tour (Eimnabad). They went to meet Bhai Lalo at his carpentry business. Bhai Lalo was delighted to meet Guru Nanak when he unlocked the door. He couldn’t do anything except gaze at first since he was so taken aback.

Guru Nanak and Bhai Mardana were brought to Bhai Lalo’s home and supper was cooked for them. He put up a clean location for the Guru to sit and dine once the dinner was ready. “You do not need to put up a particular space for me to eat; this globe has been constructed for us to dine in,” Guru Nanak replied. 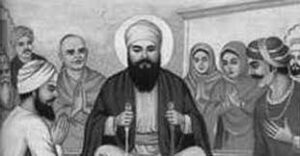 Bhai Lalo followed the instructions and delivered the dinner to the Guru’s seat. Guru Nanak then told Bhai Lalo to divide the dish into three portions so that they may all eat it. The 3 of them then sat down to eat the meal together.

‘This lunch felt like nectar,’ Bhai Mardana said after finishing the meal. “What had been placed in it?” enquired the narrator. “Bhai Mardana, this was the flavour of honest earning that you tasted,” Guru Nanak responded. This flavour is superior to that of worldly delights.”

Guru Nanak remained at Bhai Lalo’s residence for a while. The Guru’s stay in Bhai Lalo’s house became the news of the neighbourhood in no time. Upper caste Hindus were not supposed to sit with low caste Hindus back then. Brahmins and Khatris were offended by the Guru’s behaviour. They added, “This holy man is a Khatri by caste, yet he has a low-caste Muslim as his partner. He stays and eats with a Hindu of low caste. He is committing a sin that no Hindu should commit. He’s gone down the wrong road.”

Some of them sought the Guru’s help. They encouraged him to leave the low-caste carpenter behind. “You are just doing what no upper-caste Hindus should do,” they stated.

Emiabad was the property of a Muslim chief named Zalim Khan, who sent Malik Bhago, a Kshatriya high caste member, to manage the village. He was a very wealthy man who had obtained his wealth through corrupt and vicious means. He was selfish, proud, and ruthless. To demonstrate to his village neighbours what a fine guy he was, he might organise a feast (Brahm Bhoj) on a specific day each year, inviting everyone in the village to share his magnificent gift. Malik Bhago would also invite every recognised religious leader to his feast and request that they pray for his wellness, joy on earth, and a seat in heaven. The entire community gathered at Malik Bhago’s residence on the day of the feast. Many saints attended as well, although Guru Nanak, Bhai Mardana, and Bhai Lalo were missing. When Malik Bhago realised Guru Nanak had not arrived, he became enraged and ordered his men to bring Guru Nanak to his home.

Guru Nanak consented to travel to Malik Bhago’s house when the men arrived to confront him. The Guru brought a roti (bread) from Bhai Lalo’s residence with him.

Whenever Malik Bhago came, he stated, “You should know that my house is hosting a feast for the whole town today. I’m not sure why you turned down my invitation.”

In response, the Guru said, “I eat anything I want. I refuse to eat foods that I dislike. Bhai Lalo’s cooking is delicious. I don’t care for the cuisine you serve.” 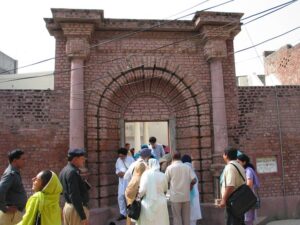 Malik Bhago, enraged, remarked to Guru Nanak, “By having dried chapaties in the home of a lower-caste carpenter, you are disgracing Kshatriyas. Why are you refusing to eat while I invited you to this feast with exquisite food?”

“To me, no guy is of upper or lower caste; everybody is same,” Guru Nanak said.

“Why is it that you have embraced poor meal from a low-caste carpenter but refuse to eat my lavish meals, which everyone else appears to like so much?” Malik Bhago enquired.

“Your meal is not holy,” Guru Nanak stated. I am unable to consume unclean food. I’m not a fan of your blood-soaked meals. As a result, I prefer not to take it. “You want to portray that the meals I make are unclean and defiled with blood while the crumbs from Lalo’s house are clean?” Malik Bhago asked. “How dare you say such a thing.”

Guru Nanak asserted that he could demonstrate it. He requested that Malik Bhago bring a platter containing the food he had made. When the tray arrived, he was holding a lavishly oiled poorer (bread) from Malik Bhago’s feast in one hand and the roti (dry bread) from Bhai Lalo’s house in the other.

According to the Guru, “You’ve already noticed a big difference between Bhai Lalo’s and your kitchen. Bhai Lalo is a nice, God-fearing man who makes his living through hard work and generously distributes his profits. The cuisine of such a person is unadulterated. It has a milky, honeyed flavour. You, on the other hand, are a unique individual. People work for you, and you keep the majority of their earnings. You don’t allow them to eat enough. They are malnourished and starving. Their blood is in everything you eat. You are arrogant, nasty, and avaricious. You never consider God. How can I accept to consume your meal, which is laced with the blood of the poor?”

Malik Bhago felt so broken by the Guru’s statements. “How can I be forgiven for my sins?” he asked as he fell at the Guru’s feet.

In response, the Guru said, “Give away everything you have to the poor. Earn a living by doing honest labour. To everyone, be good and kind. Give away your arrogance. Be modest. Always keep God in mind. Love all men as if they were your brothers. Assist everyone who requires assistance. Serve everyone who is in need. That is how you can receive God’s pardon and love.”

Guru Nanak softly pulled him up, hugged him, and said, “Remember, Bhago, your annual feast will get you no honour unless you truly intend to assist the poor and powerless. Charity given from ill-gotten wealth does not bring favours.”

The word spread that a Guru was travelling the countryside, challenging caste and power with a level of bravery never seen before. Increasingly people came to hear the Guru’s enlightenment remarks.

The Sultan of Eminabad’s son once became unwell and was unable to be treated by any specialist.

After much searching and testing by ‘Faqirs,’ someone indicated that Guru Nanak could be in Eimnabad and could cure the boy. The Sultan’s wife approached the Guru and grasped his feet, pleading for assistance. The Guru instructed him that the blessed crumbs of a nobleman were the key to his son’s better health.

Guru Nanak requested that Bhai Lalo bring a roti from his home. Guru Ji told the boy to eat the slice of bread he had brought. The youngster was healed of his ailment as soon as he ate it. Bhai Lalo became known as a pious and saintly guy as a result of this miracle. Since then Bhai law was considered a saint man and even after this people who believed in Guru Nanak Ji eternally are convinced about the fact that everyone is equal.

In the courtyard of Bhai Lalo’s residence, there was a little well where Guru Ji used to take his daily bath. This well was later clogged up, but the Ramgarhia Group recently purchased Bhai Lalo’s property, and the ancient well was re-dug. This is among the most significant stops on Guru Nanak’s spiritual voyages, and it is now part of a Sikh pilgrimage to Pakistan’s sacred sites.

Gurdwara Khuhi Bhai Lalo in Eminabad, Gujranwala, Punjab, Pakistan. Bhai Lalo Ji is related with Sri Guru Nanak Sahib Ji. At various times, Guru Nanak lived with Bhai Lalo. Bhai Lalo’s residence was converted into a dharmsala and eventually into a Gurdwara, which was titled after a khuhi (narrow well) that remained long after the original house had collapsed.