Baba Buddha Ji, among the most revered and fundamental personalities of earlier Sikhism, was born on October 6, 1506, in the town of Kathu Nangal, Amritsar. He died on September 8, 1631. After a certain time, the family relocated to Dhalla hamlet, which is located near the Ravi River, on the outskirts of Kartarpur. Bura, as he was originally called, was the sole child of Bhai Suggha, a Jatt from the Randhava clan, and Mai Garan, a Sandhu.

Bhai Budha holds a special place in Sikh history. From 1521 to 1631, he conferred the tilak of guruship to 5 Gurus, saw 7 Gurus, and spent nearly a century in intimate friendship with the first six Sikh Gurus. He was the very first priest of Harimandir Sahib, and he built the foundations for Dera Baba Nanak and the majority of Amritsar’s holy shrines.

When Guru Nanak occurred to walk by his hamlet in 1524 A.D., he was a tiny lad herding livestock outside the settlement. As per Bhai Mani Singh, Sikh di Bhagat Mala, Bura approached him and worshipped to him in the following manner, making reverence with a glass of milk as his offering: “O benefactor of the destitute! I consider myself fortunate to have seen you today. Please release me from the cycle of birth and death.” You are still a child, the Guru said. You, on the other hand, speak with such wisdom.” “Some military has established up camp near our village,” Bura explained “They mowed down all of our crops, both mature and ripening.

Then it crossed to me that if no one could stop these indiscriminate warriors, who could prevent death from striking us, young or old?” “You are not just a kid; you have the understanding of an old man,” Guru Nanak said at this point. Bura was named Bhai Buddha (buddha in Punjabi signifies “wise elderly fella”) from that day on, and later, as he grew older, he was named Baba Buddha.

Baba Buddha’s mental and spiritual reputation grew to the point where he was revered as a Brahmgyani over time (a perfect saint-scholar). At the official anointing of the Guru Sahibans, he was accorded the unusual privilege of being asked to anoint the five Sikh Gurus who followed Guru Nanak at the moment of their ascending the Spiritual Throne termed Gur-Gaddi. As a result, he became the first and only person in history to meet six Sikh Gurus and receive heavenly wisdom from them. 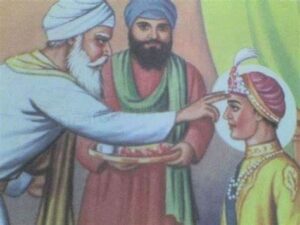 Guru Nanak took Bhai Buddha as a committed devotee. He got married at 17th year at Achal, 6 kilometers south of Batala, which did not discourage him from his intended path, and he spent much more time in Kartarpur, where Guru Nanak had taken up residence, than in Kathu Nangal. Guru Nanak instructed Bhai Buddha to put the ceremonial tilak on Bhai Lahina’s forehead at the time of his coronation as Guru Angad, i.e. Nanak II, because of his prominence in Sikh religiosity. Bhai Buddha grew to be a grand old age and had the distinct honor of anointed all four Gurus that came after him. He proceeded to devote his life to the Gurus and serve as a role model of the holy lifestyle for the expanding number of disciples.

Gurmukhi script was created by Guru Angad Dev Ji. He began teaching it to the kids of Sikhs to promote it. Bhai Budha acquired it as well, and then carried on the Guru’s role of teaching it.

He dedicated himself enthusiastically to undertakings such as the construction of the holy tank at Amritsar beneath Guru Ram Das and Guru Arjan and the construction of the baoli at Goindval under Guru Amar Das’s guidance. In the Golden Temple’s surrounds, the ben tree beneath which he would sit monitoring the excavation of the Amritsar pond still exists. He then withdrew to a ber (forest), where he looked after the Guru ka Langar’s livestock. Ber Baba Buddha Sahib is the name given to what is left of the forest following him.

Hargobind, Guru Arjan Dev Ji’s little son, was placed beneath Bhai Buddha’s tutelage and education. Guru Arjan designated Bhai Buddha granthi when the Adi Granth (Guru Granth Sahib) was placed in the Harimandar on August 16, 1604. As a result, he was appointed as the first preacher of the holy monument, which is today known as the Golden Temple. Upon Guru Arjan’s execution on 30 May 1606, Guru Hargobind built the Akal Takhat, the Timeless Throne or the Throne of the Timeless, in front of the Harimandar, entrusting its creation to only Baba Buddha and Bhai Gurdas, with no third-party authorized to participate. 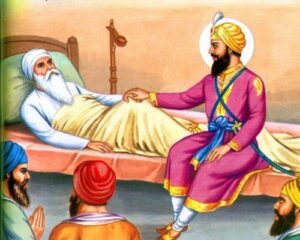 On the 24th of June 1606, Bhai Buddha conducted the investiture ceremony at which Guru Hargobind put on two swords, on either side, and he said it symbolized Miri and Piri, sovereignty and divine eminence, respectively, at the platform that Baba Buddha and Bhai Gurdas had built, called even then the Akal Takht Sahib.

Baba Buddha spent his final days in contemplation at Jhanda Ramdas, or simply Ramdas, a settlement created by his son, Bhai Bhana, and where the house had relocated from Katthu Nangal. Guru Hargobind was at his bedside when he died on September 8, 1631. According to the Gurbilas Chhevin Patshahi, the Guru placed his shoulder on the bier and administered the final rites over Bhai Gurdas, and then began reading the Adi Granth in remembrance of the departed. Bhai Gurdas finished the recital and Guru Hargobind presented a turban to Bhai Buddha’s son, Bhana, at the end of the obsequies. In Ramdas, there are two shrines dedicated to Baba Buddha: Gurdwara Tap Asthan Baba Buddha Ji, where the family lived on the village’s southern outskirts, and Gurdwara Samadhan, where he had been cremated.

With a big following, Mata Ganga Ji proceeded to receive the graces of Baba Buddha. She served a variety of foods to Baba Buddha. Baba Buddha was adamant about not bestowing any blessings. When Guru Arjan Dev learned what had transpired, he urged his wife to go on foot, carrying a small lunch she had cooked herself. 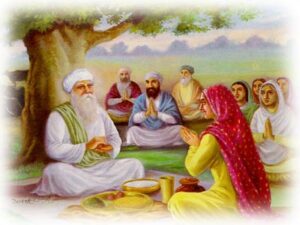 Baba Buddha was overjoyed this time and ate the basic dish. “A son will be born to you who will smash Nanak’s adversaries, just as I have squashed this onion with my hand,” he said. With the birth of Guru Hargobind in 1595, that prediction was shortly fulfilled. Since then it is believed in Sikhism that if you seek the blessings of Baba Buddha Ji you will be blessed with the baby people often visit Gurudwara Bir Baba Buddha sahib to seek his blessings and experience the serenity of the sacred place.

Gurudwara Bir Baba Budha Sahib is a Gurudwara devoted to Baba Budha Ji, also addressed as Bir Sahib. The Gurudwara is located 20 kilometers south of Amritsar, near the town of Jabal Kalan. To go to the Gurudwara, one can take a private cab. Tourists may observe the lush green crop and wheat farms of Punjab on their journey to the Gurudwara, capturing the spirit of authentic rural Punjab. Baba Buddha, the first Granthi, was anointed by the first Sikh Guru Nanak Dev as a youngster and went on to anoint the five subsequent Gurus. He flourished for 125 years. 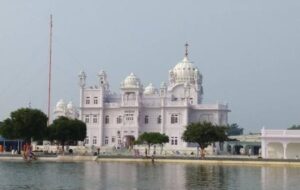 The sacred Guru Granth Sahib is set on a canopied throne made of white marble within the Gurudwara. Devotees travel to this Gurudwara to receive Baba Buddha’s graces to have a child, as did Guru Arjan Dev, the fifth Sikh Guru, who visited Baba Buddha in the expectation of having a child.

In honour of Mata Ganga’s dishonor, the Gurudwara continues to serve Missi roti and onion as Prashad. A two-story apartment block, the Guru Ka Langar, and a huge dining hall are located beside the Gurdwara in a separate property. Each Bikrami month, thousands of devotees flock to the ceremonies, making it the most important event of the year at this historic place. You can sense the pleasant vibes and tranquility as soon as you enter Gurudwara Beerh Baba Budda Sahib Ji, which will relax your mind and spirit.

Baba Budha Ji is a true light in the Sikh community, and by following his lead, many individuals have found their way to God. Even now, reflecting into Baba Ji’s life might reveal the route to God and Gursikhi.