The Panj Pyare, or Five Beloved, are the men who were inducted into the Sikh faith’s Khalsa, or oneness, under the guidance of Gobind Singh (1666-1708), the last of 10 Sikh gurus. They hold a special position in Sikh culture. The five Sikhs, Bhai Daya Singh, Bhai Dharam Singh, Bhai Himmat Singh, Bhai Muhkam Singh, and Bhai Sahib Singh, who was so recognised by Guru Gobind Singh at the ancient times at Anandpur as the very first batch to obtain khande dipdhul, i.e. sacraments of the two-edged sword, while established the core of the Khalsa.

Following the death of his father, Guru Tegh Bahadur, who declined to change religion, Gobind Singh was named Guru of the Sikhs, as per legend. Sikhs seeking safety from Muslim oppression generally reverted to Hindu practice at this time in history. To perpetuate the tradition, Guru Gobind Singh requested five men willing to give their life for sikhism and the cause at a community assembly. Despite widespread resistance, five volunteers ultimately stepped forward and were introduced into the khalsa, a select group of Sikh warriors.

The five original Panj Pyare were crucial in moulding Sikh history and defining Sikhism. These spiritual warriors promised to fight not just on the battlefield, but also on the inside, against egoism, through devotion to mankind and efforts to abolish caste.

Guru Gobind Singh spoke to an estimated 80,000 people in Anandpur Sahib from the entrance of a tent built on a hill. He grabbed his sword and demanded the sacrifice of ahead. No one answered his first or second calls, but a man named Daya Ram (formally renamed as Bhai Daya Singh) came forward on the third invitation and presented his head to the Guru. Guru Gobind Singh led him into the tent and reappeared moments afterwards, his blade streaming with blood. He then wanted a replacement head. Another volunteer stepped forward and joined him in the tent. The Guru reappeared, this time with blood on his blade. Again this happened three times. 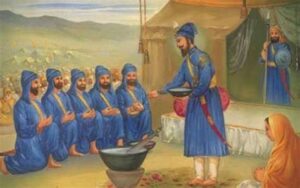 The five volunteers then emerged from the tent uninjured. Panj Pyare was the name given to a group of five people who were willing to give their lives for their Guru. uru Gobind Singh then poured some water into an iron dish. Guru ji’s wife, Sahib Devan, added sugar crystals to the water, and the Guru swirled it with a Khanda, a double-edged blade, while chanting the Five Banis. “Khande Di Pahul”  or “Amrit” is the name given to the final drink.

Each of the Panj Pyares was given five fistfuls of Amrit to drink, as well as five times of Amrit poured in their eyes. “Waheguru Ji Ka Khalsa, Waheguru Ji Ki Fateh,” they repeated each time.

Following that, the Guru knelt in front of the five cherished ones and requested the Amrit. Takht Shri Keshgarh Sahib is the new name for this location. This is the first time in religion when a Guru or Master urges his disciples to join the Order of Khalsa that he founded, showing religious democracy. “Waho Waho Gobind Singh Ji, Apey Gur Chela.

The five Sikhs, three of them were from the so-called low castes, a Kstriya, and a Jat, were the basis of the Khalsa Guru Gobind Singh’s self-abnegating, martial, and casteless fraternity. They have given the surname Singh, which means lion, and were required to wear the Khalsakes’ five emblems: unshorn hair and beard; kanghd, a comb in the kes to keep it tidy as opposed to the recluses, who kept it matted as a sign of having relinquished the world; kard, a steel bracelet; kachchh, short trousers worn by soldiers; and kirpdn, They were told to support the oppressed and resist the tyrant, to believe in one God, and to treat all people equally.

Panj Piare has jointly operated as the ultimate authority, representing the GuruPanth, at pivotal points in history. During the war of Chamkaur, Guru Gobind Singh was ordered to leave the stronghold and rescue himself to reassemble the Sikhs by the last five surviving Sikhs, who formed the Council of Five, Panj Piare. Guru Gobind Singh abolished the masand system and put an end to the line of living gurus before his death. He had established the core of a casteless and democratic society in the organization of Panj Piyare. 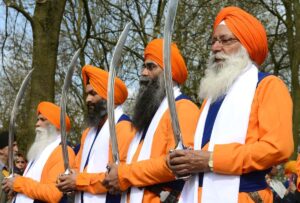 BhJi Daya Singh was one of the first Panj Pyare to respond to Guru Gobind Singh’s appeal and donate his head. Daya Ram became Daya Singh and joined the Khalsa warriors after renourenouncingKhatri caste’s profession and association. The terms “Daya” and “Singh” signify “merciful, gentle, and empathetic,” attributes that are prevalent in the five adored Panj Pyare who all carry this name.

Sahib Chand left up his Nai caste’s profession and union to become Sahib Singh and join the Khalsa soldiers after initiation. “Sahib” literally means “lordly or masterful.” On December 7, 1705, Bhai Sahib Sigh gave his life in the fight of Chamkaur to protect Guru Gobind Singh and the Khalsa.