The Punjabi language is an Aryan language spoken in India that is thought to have started with the Sauraseni Apabhramsa. However, early Prakrit languages, particularly Pali and Adi-Arya languages, have influenced both its phonology and the Rupa Vidhan. As a result, the Punjabi language offers a continuous language classical history of ancient Punjab’s cultural and philological underpinnings.

Guru Nanak (1469–1539) is regarded as the founder of Punjabi literature, language, and culture. He turned traditional verbal structures into metaphorical psyche representations in each region. He used illustrative metaphors to describe the linguistic content step by step. Guru Nanak composed a highly sophisticated spiritual discourse of Indian culture using the common Punjabi language.

Punjabi is an important and lively language in today’s globe. . It is the top-ranking language recognized by the Indian constitution and is a primary language of Punjab. The Punjabi language has grown in importance not just in India, but also around the world. It has a dazzling reputation in literature, academia, marketing and advertising, music, publishing, sports, film, and a variety of other fields. 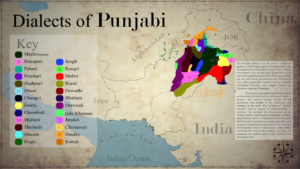 Punjabi is a tonal language, and varied tones in Punjabi can distinguish words that would otherwise sound similar. The lost muttered (or “voiced aspirate”) series of consonants gave rise to three phonetically distinct tones. Phonetically, the tones can be continually rising or occasionally rising and dropping, and they can span one or two syllables, but they are classified as mid, high, and low.

Majhi, Doabi, Malwai, and Powadhi are important Punjabi dialects in India, with regional Hindi/Sanskrit influences on the basic Punjabi language. In Pakistan, dialects such as Majhi, Pothohari, Hindko, and Multani arise from the regional Sindhi language influencing the major Punjabi language. The vocabulary of Pakistani Punjabi is influenced by Persian, Central Asian, and Arabic. 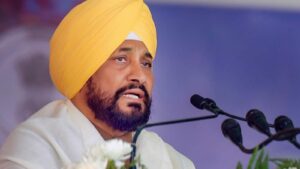 Punjabi is a very well-known and spoken language but people get influenced by western culture and also because most Punjabi’s either already live in foreign or leave after teens to settle overseas. In all this process they somehow forget their roots (mostly) parents fail to teach their children their very own mother tongue Punjabi. People have this false perception that if they start teaching their kids English from their childhood then they will be good speakers but what about mother tongue. Even in schools, English is compulsory nowadays. It all eventually will deteriorate the value of the traditional language Punjabi.

The Punjabi language, from a classical standpoint, has moved away from religious teachings in favor of a secular and artistic way of life. The 20th century Punjab impacted many social and religious political movements, which were fragmented as a result of the historical development phase. Until recently, all Punjabis shared the Punjabi language, literature, and culture.

In 2021 Chief Minister of Punjab Charanjit Singh Channi Ji announced that Classes 1 to 10 will be required to study Punjabi. Aside from that, it will be made compulsory in offices. The promotion of the mother tongue has been made mandatory. If a school breaks the rule, it could face a punishment of up to Rs 2 lakh. Punjabi will be inscribed on top of all boards in Punjab, according to regulations.

The Punjabi and Other Languages Education (Amendment) Bill will be introduced in 2021. Punjabi language would become a compulsory subject in schools under this bill. It has fixed a fine of Rs. 2 lakh in the event of a breach. All government business must be performed in Punjabi, according to the bill. For the first, second, and third infractions, a penalty of Rs 500, Rs 2000, and Rs 5000 will be applied, accordingly.

The state administration announced this step in response to the Central Board of Secondary Education’s (CBSE) recent news that Punjabi would be demoted from a “major subject” to a “minor subject.” For the first-term exams of 10th and 12th grades, CBSE had categorized all regional languages as minor courses.’

This bill could be revolutionary if implemented properly because in this way children would come to know about their very own language. And this is how Traditions and cultures will sustain for a longer period and pass on to future generations.

Punjabi is already a renowned language that is why in many movies Punjabi songs or dialogues are introduced as it is such a vibrant and fun language loved by many and needed to be protected. Punjabi has risen to prominence in recent years as a language spoken several throughout the world even though it is not a national language. Punjabi has also made its way into national and international media, such as Hockey Night in Canada, which is now accessible in Punjabi. Punjabi poetry and literature have also been translated into various languages around the world. Punjabi music and, of course, Bhangra, the native dance form of Punjab, is regarded as one of the most dynamic dance genres. Flash mobs of bhangra dancers are frequent in Vancouver as well as other parts of Canada.

Combo words, also known as echo words, are created by making minor changes to the original word and then combining the original and altered words to create a rhyming effect. Roti – shots, pads hot kadhai, and khaana – vaana are some common Punjabi echo terms. The second element of the word normally has no meaning on its own, but when combined with the first, it provides a new larger meaning.

All these things make Punjabi so much fun. The main reason why Punjabis are called so lively is because of their language and of course the way they talk. If things keep on changing then the Punjabi language might become minor in the modern world. It is suggested to bring it more in light and communicate in Punjabi with children to make them feel good about their language and carry on the legacy of Punjabi.