Guru Tegh Bahadur was the youngest son of Guru Hargobind, the sixth guru: Guru Hargobind had one daughter, Bibi Viro, and five sons: Father Gurditta, Suraj Mal, Ani Rai, Atal Rai, and Tyaga Mal. Tyaga Mal was born in Amritsar on the morning of April 1, 1621. He is known as Tegh Bahadur (Swordsman), given to him by Guru Hargobind after he demonstrated his military prowess against the Mughals. 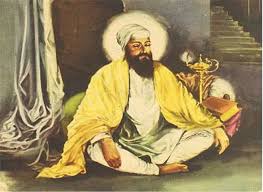 Amritsar at that time was a center of the Sikh faith. As the seat of the Sikh Gurus, as well as its connections with the Sikhs in remote parts of the country through the chains of Masands or missionaries, it had developed aspects of the country’s capital.

Guru Tegh Bahadur was raised in Sikh culture and trained in archery and horseback riding. He also studied ancient writings, such as the Vedas, the Upanishads, and the Puranas. He loved long distances and meditation. Tegh Bahadur was married on February 3, 1632, to Mata Gujri.

In the late 1640s, near the end of his life, Guru Hargobind and his wife, Nanki, moved to the ancestral village of Bakala in the Amritsar region, along with Tegh Bahadur and Mata Gujri. Bakala, as described in Gurbilas Dasvin Patshahi, was then a thriving city with many beautiful lakes, springs, and baolis. After the death of Guru Hargobind, Tegh Bahadur continued to live in Bakala with his wife and mother.

In March 1664 Guru Har Krishan contracted smallpox. When asked by his followers who would lead him after him, he answered Baba Bakala, meaning that his successor would be found in Bakala. Taking advantage of this ambiguity in the words of the dying Guru, many joined themselves in Bakala, claiming to be the new Guru. Sikhs are astonished to see so many plaintiffs.

The Sikh tradition has a legend about how Tegh Bahadur was chosen as the ninth guru. A wealthy merchant, Baba Makhan Shah Labana, once prayed for his life and promised to give Sikh Guru 500 gold coins if he survived. He came looking for the Ninth Guru. He went from one plaintiff to another making his bow and giving each Guru two gold coins, believing that the good guru would know that his meaningless promise was to give 500 coins for his safety. Every “guru” he met would receive two gold coins and say goodbye. He then discovered that Tegh Bahadur also lived in Bakala. Labana gave Tegh Bahadur a standard donation of two gold coins. Tegh Bahadur gave him his blessings and noted that his offering was much shorter than the five hundred promised. Makhan Shah Labana quickly made a difference and ran high. He started shouting from the roof, “Guru ladho re, Guru ladho re” which means “I have found Guru, I have found Guru”.

In August 1664 the Sikh Sangat arrived in Bakala and anointed Tegh Bahadur as the ninth Sikh grandmother. Sangat was led by Diwan Durga Mal, and the official tikka ceremony was held by Father Gurditta, Guru’s older brother Tegh Bahadur, giving Guruship to him.

As was the custom among Sikhs after the assassination of Guru Arjan by Mughal Emperor Jahangir, Guru Tegh Bahadur was surrounded by armed guards. He lived a difficult life.

Padshah Burranji (c. Late seventeenth century) prob. remains the first source of tournament records between Aurangzeb and Guru – portraying Tegh Bahadur as a migratory robber, commanding an army of thousands. Responding to a complaint from the Brahmins and Qazi, Aurangzeb had issued a summons but when confronted with contempt, he ordered Tegh Bahadur forcibly arrested and sentenced to death. However, Ram Singh saved him – he became Guru’s pledge and brought him to his place, only for Guru to flee. Aurangzeb treated Ram Singh I very badly but did not punish him; instead, he was sent on a campaign trip to Assam. Burranji does not mention what happened to Tegh Bahadur later; it is possible that he resumed his journey eastward. It is unclear why the Mughals did not continue the attack. [A]

The main nucleus of Sikh affairs remains the Bachittar Natak, a memorial to the son of Tegh Bahadur, dating to the mid-1680s and 1690s. from the “testimony of faithful Sikhs”, they began to appear in the late eighteenth century.

An ancient Persian source documenting his assassination is Siyar-ul-Mutakhkherin of Ghulam Hussain Khan c. 1782 when the pressure on Tegh Bahadur (suspected) of studies was captured to provoke Aurangzeb’s outrage. 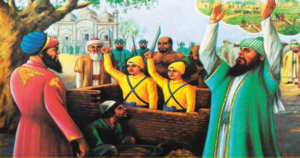 Tegh Bahadur, who succeeded Ninth (Guru) Nanak became a man of authority and a large number of followers. (In fact) Several thousand people often accompanied him as he traveled from place to place. His contemporary Hafiz Adam, a faqir who is part of the group of followers of Shaikh Ahmad Sirhindi, also had a large number of murids and followers. Both men (Guru Tegh Bahadur and Hafiz Adam) were accustomed to wandering in Punjab, accustomed to the practice of coercion and extortion. Tegh Bahadur used to raise money for Hindus and Hafiz Adam for Muslims. The royal waqia navis (journalist and intelligence agent) wrote to Emperor Alamgir [Aurangzeb] about their operation, adding that if their power increased they might even oppose it.

Satish Chandra however warns against taking Hussain Khan’s argument literally. He was a relative of Alivardi Khan – one of Aurangzeb’s closest sources – and may have been giving “official reasons”.

Over time, a series of narrative stories from the bardic texts were incorporated into it, to form a famous (probably) story that goes as follows: Tegh Bahadur left his place in Makhowal to face the persecution of the Kashmiri Brahmins by Mughal officials but was arrested. at Ropar and was arrested in Sirhind. Four months later, in November 1675, he was transferred to Delhi and asked to perform a miracle to prove his closeness to God or to convert to Islam. Guru refused and three of his colleagues, who were imprisoned with him, were tortured to death in front of him: Bhai Mati Das was cut to pieces, Bhai Dayal Das was thrown into a pot of boiling water, and Bhai Sati Das was burned alive. Subsequently, Tegh Bahadur was beheaded in public at Chandni Chowk, a market square near Red Fort.

Satish Chandra expresses skepticism about the authenticity of the news, which focuses on miracles – Aurangzeb could not believe it. Louis Fenech refuses to appeal any decision, due to a lack of key resources; however, he notes that these Sikh accounts have a code of martyrdom, to gain pride rather than student suffering.

Significantly, in contrast to the ruling headline in the Sikh literature, some pre-Sikh accounts have been accused of inconsistent succession: Ram Rai, Guru Har Krishan’s older brother, has been arrested for inciting Aurangzeb against The Bahadur by proposing that. He proves his supremacy by performing miracles in the Court. Sohan Lal Suri, a court historian of Ranjit Singh, in his book magistrate Umdat ut Tawarikh (c. 1805) chose to repeat Hussain Khan’s general argument: Tegh Bahadur had given refuge to all the insurgents and commanded a large nomadic army across Punjab; so he was initially humiliated, lest he should announce his revolt soon.

Guru Har Gobind was the father of Guru Tegh Bahadur. He was originally named Tyag Mal (Punjabi: ਤਿਆਗ ਮਲ) but later renamed Tegh Bahadur for his bravery and courage in battles against Mughal forces. He founded the city of Anandpur Sahib and was responsible for rescuing the Kashmiri Pandits, who were being persecuted by the Mughals. 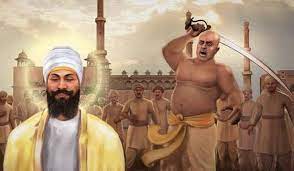 After the assassination of Tegh Bahadur by Mughal Emperor Aurangzeb, several Sikh temples were erected in his memory with his friends. The Gurdwara Sis Ganj Sahib in Chandni Chowk, Delhi, is built on the site of the beheading. Gurdwara Rakab Ganj Sahib, also from Delhi, was built on the residence of a student of Tegh Bahadur, who set fire to his house to burn his master’s body.