Nishan group in Khalsa to train people to protect themselves with the help of Gatka. Nishan e khalsa offers Gatka training. According to ‘Mahan Kosh’ edited by Kahan Singh Nabha, ‘Gatka – a three-handed stick, used to teach the first part of a club fight. It has a leather cover. On the right hand holding Gatka and on the left ‘Phari’, two men play alone. Persian – Khutka. (See ‘Mahan Kosh’). Gatka is a traditional Sikh fighting art. It is based on the fundamental goal of uniting the mind, body, and spirit in the rhythm of life to train a holy soldier to defend himself. Gatka is a unique art of defending & demonstrating combat skills and self-control which is the best part of this time-tested martial arts. Gatka’s practice is also aimed at helping young people stay healthy and fast by keeping them away from the risk of substance abuse and drug abuse to live a more positive and responsible life.

Gatka is a form of martial art associated primarily with the Punjab Sikhs and other related tribes, such as the Hindkowans. It is a style of fighting with sticks, with wooden sticks intended to mimic swords. The Punjabi word for word, gatka, refers to the wood that was used, and it may have originated from a Sanskrit word, Gada, meaning “mace”. 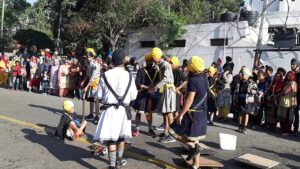 Another weapon used in the game is the shield, known as the phari. It is round in shape, measuring 9 x 9 inches (23 cm × 23 cm), and is made of dry leather. It is lined with cotton or dry grass to protect the player’s hand in the event of a full touch by the enemy.

Gatka originated in Punjab in the 15th century, but most of the Gatka forms used today in western Europe are European versions of what was originally the Sikh war art known as Shastar Vidya. There was a revival in the mid-20th century, with the International Gatka Federation founded in 1982 and legalized in 1987, and gatka is now popular as a martial art and often displayed during Sikh festivals.

Gatka’s theory and strategy are taught by Sikh gurus. It is given in the continuous genealogy of the ustāds (kings) and was taught in many akharas (forums) around the world. Gatka was employed in Sikh wars and was thoroughly tested for war. From the need to protect the dharma (righteousness), but also based on the combination of spirit and body: miri piri). Therefore, it is generally considered to be a spiritual and physical thing.

After the Second Anglo-Sikh War art was banned by the new British rulers of India in the mid-19th century. During the Indian Revolution of 1857, the Sikhs helped the British to put an end to the rebellion. As a result of this assistance, restrictions on martial arts were relaxed, but the Punjabi martial arts that emerged after 1857 had changed dramatically. The new style has used sword-fighting techniques in the training stick of wood. It was called gatka, after its main weapon. Gatka was widely used by the British Indian Army in the 1860s as hand-to-hand combat. The Department of Sport and Youth Affairs of the Government of India has included Gatka, and three other traditional sports, namely Kalaripayattu, Thang-Ta, and Mallakhamba, as part of the Khelo India Youth Games 2021, which is expected to be held in Haryana. This is India’s national sporting event.

The Khel (meaning “sport” or “sport”) is a modern part of the gatka competition, originally used as a sword (fari ‑ gatka) training or stick fight (in khela) in ancient times. Although khel gatka today is commonly associated with Sikhs, it has been used in the military art of some ethnocultural groups. It is still practiced in India and Pakistan by the communities of Tanoli and Gujjar.

The functionality of the Gatka that we see today was enhanced in the early 19th century. Divided into traditional (Official) style and sports (Khel). As a game, legal rules were written in 1936. Interestingly, Punjab University Patiala is the only place that offers a 1-year diploma course to earn this art form. 75% of the total amount paid, which is Rs. 25,000 Funded by the NGO ‘Sarbat da Write’ and the student should pay only the remaining 25% of the fee. 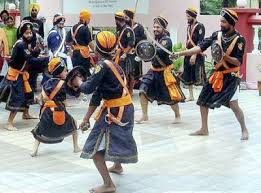 Gatka is an important and exciting part of many Sikh festivals, processions, and Gurdwaras, especially after its revival and legalization by the International Gatka Federation in 1987. Today, it is a fair game that you find yourself playing at the national level, in honor of the Gatka Federation of India founded in 2008. It is a symbol of the preservation and practice of a good form of mortal karate since ancient times, incorporating, uplifting, and protecting our rich culture and history.

The Punjab government has now officially adopted Gatka as a game in its policy, and players enjoy a 3% share of the time of adoption, as do players of other sports.

This art form has succeeded in fighting hands to the point of using swords, kirpans, lathis, axes, wooden sticks, and more. One begins by learning the basics of wooden bamboo. Later, kirpans were used. They come in all shapes and sizes to suit everyone’s needs.

Next, the shoes were unveiled. They even come in a variety of forms, ranging from basic, simple to large, spikey. If one knows to use these basic weapons, some Shastras are used to ace in this art form. The handling and use of such weapons can be dangerous, hence the strict moral standards, concentration, and proper use of them.

Shastras like Dastar (turban) or Kamar Kasa (belt) are not used for warfare but are worn by Nihangs for decoration. Ranjit Nagara (victory drum) and Gurbani repetition are used to lift Sikh spirits and help them fight bravely. Even the two are considered Shastra used in Gatka.

Some of the Shastras used in Gatka are as follows

During learning, it is not the only fighting element that is taught. This kind of art is a combination of body and mind and soul. The training method with instruction and dedication, as well as a balanced mind is what this art form teaches.

Where can you find this game

Apart from the various Indian institutions that provide training facilities for the game, it is a very interesting and attractive place to prove the game at any of the major Sikh festivals. Among the processions, hymns, and gourmet food, Gatka-style entertainment is practiced by trained professionals.

So, the next time any Sikh festival is near, be sure to keep it relaxed to enjoy the festivities!