Why is Baisakhi celebrated in Punjab?

Baisakhi, commonly referred to as Vaisakhi, is the Punjabi harvest festival. It is observed by people of all faiths. Baisakhi has religious importance for the Sikhs in addition to honoring the harvest season. Baisakhi is the first day of the Sikh calendar year.

In the Punjab and Haryana areas, Baisakhi festivities are vibrant and colorful. The traditional ‘Bhangra’ and ‘Gidda’ dances, performed by men and women alternately, are the highlight of Baisakhi celebrations. Sikhs visit and bathe in rivers or lakes before visiting holy shrines on Baisakhi, and gurdwaras hold kirtans. The holy occasion is also marked by community fairs and nagar kirtan processions.

The festival of Vaisakhi Chauth commemorates the founding of Sikhism. Guru Tegh Bahadur, a Sikh leader, was assassinated after refusing to convert to Islam on the demands of Mughal emperor Aurangzeb. This sparked the development of the Sikhism order and, eventually, the Khalsa fraternity.

As a result, Vaisakhi is today commemorated to commemorate the auspicious day as well as the founding of the Khalsa and Sikhism’s unity. Many Hindus, on the other hand, observe it as a harvest celebration.

The Mughals executed Guru Teg Bahadur, the ninth guru of the Sikhs, on November 11, 1675, according to history. His son Guru Govind Singh, who was also the tenth guru, was forced to take up arms in protest of this injustice. 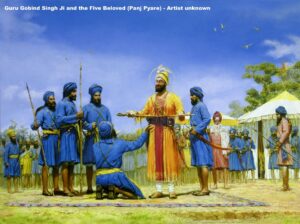 He chose Baisakhi as the fortunate day to begin this crucial mission by creating the Khalsa order. The guru asked for his people to come forward and sacrifice themselves for the welfare of the clan on April 13, 1699, at a conference in Anandpur, Punjab. This is a pin-drop silent appeal. He called again and received the same reaction. A thirty-year-old man called Daya Ram Khatri came forward and volunteered for the third time. The guru led Daya Ram to a nearby tent and then returned alone, his blade soaked in blood. He asked for volunteers a total of four times. Dharm Das, a Jat from Delhi, Mokhan Chand, a washerman from Dwarka, Sahib Chand, a barber from Bidar, and Himmat Rai, a water carrier from Jagannatha, were among those who offered their services. Each of them accompanied him to the tent, where he turned alone with his bloodied blade every time. The guru returned to the tent, this time for an extended period. The five men dressed in saffron-colored clothing emerged next.

Baisakhi had assumed they were dead, so the throng was taken aback. They sat on the specially constructed dais as the guru prepared water to bless them. He swirled the batasha that his wife, Mata Ji to Ji, had poured into water in an iron vessel with a sword called Khanda Sahib, while the congregation read words from their scriptures.

The water was now revered as amrita, the divine elixir of immortality. It was delivered to the five volunteers first, then to the guru, who drank it and then to the rest of the gathering. The Khalsa Pantha was formed by all those present, regardless of caste or creed.

Because society was divided at the time based on religion, caste, and social rank, this was also a significant step toward national integration. The idea of having a community where the individual’s origins were immaterial was seen as a huge step forward.

Those who had given their lives as a sacrifice were known as the Panch Pyare. The guru told them to wear the five K’s: Kesh (length hair), Kangha (comb), Kirpan (dagger), Kachha (shorts), and Kara (bracelet). He abolished the Guru system and demanded that all Sikhs accept the Grantha Sahib as their eternal guide. He pushed them to come to him with their sunshorn hair and beards to be baptised by the sword. 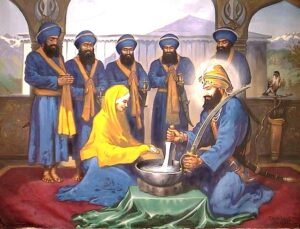 The primary ceremony, however, takes place in Anandpur Sahib’s Gurdwara, where the order was founded. The Guru Grantha Sahib is ceremonially carried out of its resting chambers around 4 a.m. It is set on its throne after receiving a symbolic bath of milk and water. The Panch Pyare, or priests, then recite the verses that the original Panch Pyare spoke when the order was founded.

The Jabji Sahib, Jap Sahib, Sudha Savahiye, Chow Payee Sahib, and Anantpur Sahib are among the Panch Bani prayers. Amrita is made in an iron vessel while the Panch Bani is being sung, as Guru Govind Singh did.

Devotees take five sips of amrita and swear to work for the Khalsa Panth. The Karah Prasad is offered to the guru for his blessings at midday, following Baisakhi the areas. The congregation is then given a copy. They consume the prasad before taking part in the guru ka langar. Believers engage in kar seva. Shabads and kirtans are sung throughout the day to honor Guru Govind Singh and the beloved five, the Khalsa Panth’s founders.

On this day, people get together in huge numbers with their neighbors to participate in the festival’s processions. On the beats of Punjabi dhol, bhangra and gidda are performed. Dance, music, and cuisine are enjoyed by both men and women dressed in traditional attire. People dress in yellow and orange because they are the festival’s traditional colors. On Baisakhi, the first crop of wheat (India’s primary grain) is harvested and presented to God amid prayers and celebrations.

In other words, farmers praise God for providing all of the ideal conditions necessary for bumper crop production on the crop fields. Baisakhi fairs are held all over Punjab and are a highlight of the festival for many people. Locals dress up, sing, and dance in their finest attire. Races, wrestling matches, fake fights with Sikh kirpans (swords), gymnastics, and folk music are all part of the festivities. The brightness is enhanced by a plethora of vendors selling trinkets, handicrafts, and local cuisine.