Sarovar, built around the Gurudwara and its significance

A sarovar is the hallowed waters of a pond or moat-like tank created around or near a gurdwara in Sikhism. The gurdwara sarovars were primarily designed for utilitarian purposes, such as providing fresh water for cooking and bathing. In current times, visitors mainly utilize sarovars to wash their feet or practice spiritual cleansing known as naan.  Because of the continuous recitation of Sikh scripture in the region, the sacred springs of particular sarovars are thought to have therapeutic capabilities.

The major temple edifice is surrounded by a big pool known as the Sarovar. Worshippers who visit these places often bathe in such springs because Sikhs believe that bathing in the holy waters of such Sarovars provides spiritual and worldly blessings.

Draining and cleansing these Sarovars on a routine basis has been a normal practice. Kar Seva is the Punjabi name for the task of cleaning these pools. Following the removal of the silt from the emptied pool, a new filtering system was put on top of the Seva. To maintain the water clean and clear, fish are also abundant in such Sarovars.

Immersion at Sikh Gurudwara sarovars has a particular purpose. Langar and sarovar baths are all about equality. There will be no prejudice. People seem to believe in caste systems in other sects, and upper-class individuals do not like to sit beside a shooter class citizen. Even shooters weren’t supposed to drink from the very same well as upper castes. We are all equivalent, according to all Sikh gurus. To ensure that Sikhs no longer believe in the caste hierarchy, they established the langar and soak in the same sarovar. In the langar, there is no distinct seating. According to legend, even Akbar had to sit on the floor to keep up with his fellow Sikhs. You can bathe without discriminating in sarovar. In Sikhism, only those with open hearts are appreciated. 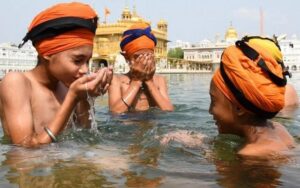 Tarn Taran gurudwara has one of the largest Sikh serovars (ponds) and is about rectangular. It has 289 and 283 meters (948 and 928 feet) on the northern and southern sides, and 230 and 233 meters (755 and 764 feet) on the eastern and western sides. Rainwater came in from the neighboring lands and fed the Sarovar at first.

The Sarovar was connected to the Lower Kasur Branch of the Upper Ban Doab Canal at Rasulpur watermills, 5 kilometers to the southeast, by Maharaja Raghubir Singh of Jind in 1833. Bhai Gurmukh Singh and Bhai Sadhu Singh cemented and spanned the channel in 1927-28. In 1931, they also oversaw Kar Seva, or the total desilting of the Sarovar through voluntary labor. 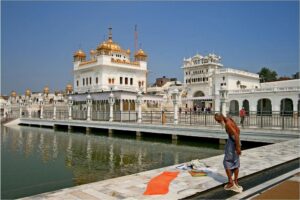 The operation was carried out again in 1970, this time under Bhai Jivan Singh. The majority of the bunches surrounding the Sarovar have been removed, and a verandah has been built in their place.

The name Tarn Taran, which has since been adopted by the town, was initially given to the theSarovarr by Guru Arjan. “The boat that takes one across the ocean of existence,” it implies. The water of the old pond was discovered to have medical powers, particularly for healing leprosy, as per Sikh legend. As a result, the sarovar was also termed as Dukh Niwaran.

The construction of Sri Harmandir Sahib took place on November 6, 1573, and was finished in 1577. In 1584, the natural pond was converted into a masonry edifice. Sri Guru Ram Dasji laid the foundation of Amritsar on land owned during the period of the third Sikh Guru, Sri Guru Amar Das Ji.

The tank has a length of 500 feet, a width of 490 feet, and a depth of 17 feet. It was designed to hold only rainwater and it would dry up if rainfall was insufficient.

Guru Ram Das, who had not yet ascended to the gaddi, went to on Guru Amar Das’s orders to identify a location for the sacred tank’s excavation. When Guru Ram Das was digging the hole, he came upon a Yogi who was meditating.

After a while, the Yogi opened his eyes and told Guru Ram Das that he had been meditating here for some time, hoping to find a Guru who could save him. He revealed his true identity as Santakha before passing away. Santokhsar was the tank’s name at the time.

Guru Arjan completed the work on the reservoirs in Santokhsar and Amritsar that had been left undone. The building work was to be overseen by Baba Buddha. Santokhsar was built between 1587 and 1589.

The Ramsar sarovar, the tiniest of Amritsar’s five sacred sarovars, is located next to Gurdwara Ramsar. The current Gurdwara Ramsar is a small marble-lined hall topped by a gilded, fluted lotus dome, situated close to Chatiwind Gate on the south-eastern side of the walled city of Amritsar.

It was developed in 1855 on the site of the original holy place, where, long before the current Gurdwara was constructed, Guru Arjun Dev, the fifth Sikh Guru, chose this location as the location where the Guru Granth Sahib would take shape because he was searching for the perfect spot away from the busy city of Amritsar.

The Sarovar is located opposite tri Harmandar Sahib, near Gurdwara Mata Kaulan and Gurdwara Baba Atal in Amritsar. It was titled after Bibi Kaulan, the adopted daughter of the Qazi of Lahore, who was nurtured as a Muslim.

She was a profound religious lady who transcended religious differences and sought sanctuary in Amritsar with the 6th Guru, Hargobind Ji. The samadhi of this lady, Mata Kaulan, is located at the Kaulsar Gurdwara’s western end.

Guru Hargobind, the 6th Sikh guru, instructed worshippers to take a plunge in the Sarovar Kaulsar before entering the Golden Temple sarovar, indicating the importance of Gurdwara Mata Kaulan and Kaulsar sarovar.

Guru Hargobind Sahib, the 6th Sikh guru, created the sarovar, and Maharaja Ranjit Singh constructed the current exquisite gurdwara. The gurdwara is surrounded by the old villages of Chatiwind and Sultanwind.