Gatka is a well-established ancient martial art that has existed in northern India for thousands of years. It is considered a spiritual and physical exercise. Both of these personality traits are developed at a high level during the learning phase in this ancient art.

Although it uses the sword as its main weapon, many other weapons are available to the Gatka commander. Today, this art exists only among Sikhs who have conveyed vibrant ideas from generation to generation, from their sixth Guru, Guru Hargobind wearing the two swords of Miri (temporary, worldly) and Piri (spiritual, transitory)

The Sikhs have been responsible for reviving this original art to ensure its survival despite the intense persecution of indigenous peoples in India by foreign invaders like the Mughals and others for centuries.

Gatka is a complete military system that utilizes spiritual, mental, and physical skills in equal parts to help a person with full potential to defend himself and others. It is a program that can only be used for self-defense as it says: In addition to giving the student the defensive skills, it also helps the person with other aspects of his or her life: it keeps the mind alert and responsive, keeping the body close. and it makes the soul fearless, sensitive, and quiet. 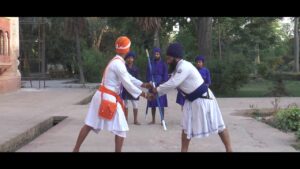 The strategies involved work very well in defense and attack as well as good visibility. The Sikhs are well acquainted with Gatka and perfected its use in warfare. Many wars were won by the Sikhs, despite being almost always counted under opposing forces. Gatka’s internal strategies have been combined with Sikh spirit practices to create a good fighting system. Opposition forces wrote down how amazing these Sikhs were in battle!

Gatka art incorporates a series of combat training programs that include several armed – unarmed systems and the use of defense and criminal weapons. It aims to connect the mind and body with a meditation on spiritual verses in Gurbani, a complete system in which the character and moral attitude of the student are formed.

Gatka is a traditional Sikh fighting art. It is based on the basic principle of uniting the mind, body, and spirit in the rhythm of life to train the saints – a soldier to be able to defend himself. When learning art, you go from barefoot combat to using various shastras (weapons) such as Kirpans, chopsticks, lathis, marotis, nun chucks, axes, and much more.

The first shastra a student will use is a stick usually made of bamboo, sometimes called Marathi. With a cane, you are taught all the basic body movements and attitudes needed. Once these techniques have been studied then these can be used with other shastras as you get more information. 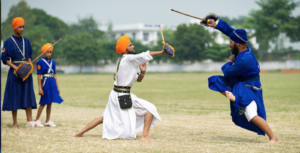 Kirpans of the Shastras type come in different shapes and sizes and can come in different styles. Other kirpans used by doctors are Talwar, Gurj, Standard, Thega, etc. Once the different techniques are well known, you get into spare with shastars and that’s when you’ll be introduced to the shoes. Shoes come in many shapes and sizes. They vary greatly – some are large and heavy; others have pegs in them to attack; some are very basic and are used only for self-defense.

Saving is a completely different level of performance. It can be very dangerous to save with kirpans and axes and requires strong discipline, concentration, clarity of mind, and self-control. Some shastars are not used in action but are worn by a doctor for protection. These are worn on our “Kamar Kasa” (belt) or near our dastars (Durban) as the “chakra” (metal ring).

Other instruments used in the war were not even weapons such as the Ranjit Nagara, the victory drum, used to boast of the Sikhs’ conduct going to war, during the war, and out of battle. Even Bani was used to help the army in time

The name Gatka refers to a piece of wood used in training called soti, which is attached to a basket. All martial arts are based on the proper use of a large range of melee weapons (hand and arm). The basis of art is Panthra which refers to the form, contact, and movement of the feet, body, arms, and arms properly, simultaneously. The Gatka route begins with a simple four-step process called the Panthra. This is a work of balance and integration and should be practiced repeatedly. Movement requires equal and simultaneous use of both hands and makes one ambidextrous. This basic movement is followed when all the weapons are used and provides an unparalleled balance to the doctor.

Gatka is usually taught in rhythm and aims to achieve fluid, natural and flowing movements, without hesitation, skepticism, or anxiety. All movements, including attacks and attacks, are based on the area of ​​the hands, feet, and arms during the Panthra dexterity exercise. Many weapons are taught in special ways, in addition to the Panthra exercise.

The most common weapon used by expatriates in Gatka today is a lat (a stick of various lengths), but all other traditional weapons are still being taught. Perhaps the most common combination of weapons in the hands of modern Gatka workers and in the past is the sword and shield. As a person progresses through their experience, they learn about special “rooms” and other tricks, different from certain weapons, such as the head (a double-edged sword), the tabar (ax), and the barcha (spear).

The panhra exercise is a smooth, non-stop movement, and there is no specific “movement” that is the same as saying, karate in Gatka. Instead, modes of movement, turn, stop, attack, and defense are studied and the application depends on the circumstances at the time.